More than 10 lakh kisans from across the country came together on September 5, in a massive show of strength and unity, for a “Kisan-Mazdoor Mahapanchayat” organised by the Samyukt Kisan Morcha (SKM), in Muzaffarnagar in Uttar Pradesh. Over 300 kisan unions from 15 states across the country, including UP, Haryana, Punjab, Maharashtra and Karnataka and several community organisations from different districts of UP participated in the event. There was a massive contingent of kisans from Haryana and Punjab. Trade unions and organisations of workers of different sectors also sent their delegations to the mahapanchayat and gave their support to the kisan’s struggle. 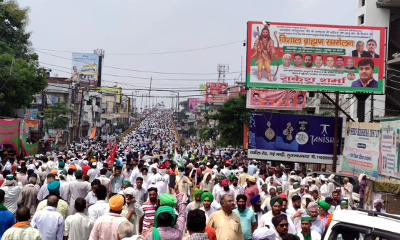 As many as 5,000 ‘langars’, including mobile stalls, were set up for participants. The participants from different parts of the country were welcomed and hosted by the local kisan organisations. The Mahapanchayat was marked by the militant fighting spirit of the participants and their resolve to carry the struggle through to the end.

Kisan leaders from different parts of the country addressed the rally. They reiterated their demand that the anti-kisan laws passed by the central government should be revoked, the Electricity Amendment Bill 2021 should be withdrawn and a law should be passed guaranteeing remunerative minimum support price for all agricultural produce in all parts of the country. They supported the demand of the kisans cultivating sugarcane, who are agitating in UP for Rs 450 per quintal SAP (State Advised Price) for sugarcane. 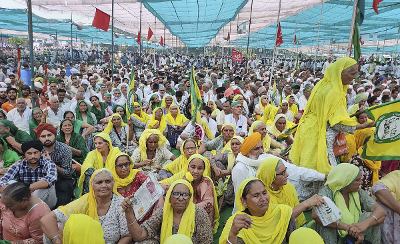 The kisan leaders criticized the economic policies of the government, which are in favour of ensuring the profits of the biggest monopoly capitalist corporate houses, and which are ruining the kisans and all the people of our country. They raised their voices against the government’s privatization and disinvestment program, being promoted today in the name of the National Monetisation Pipeline (NMP). They criticized it as a program to sell out the assets of the people to the biggest private corporate houses.

Participants in the Mahapanchayat emphasized the unity of people across all communities in the struggle. They gave a fitting reply to the dastardly attempts of the state to divide people on a communal basis, spread communal hatred and organize communal violence.

Denouncing the government as anti-mazdoor and anti-kisan, the SKM announced their decision to include in the struggle trade unions, organisations of the agricultural workers, students, youth, women and al sections whose lives, livelihoods and basic rights are under attack by the policies being pursued by the government.

SKM announced its decision to expand the protests to all states across the country. It was announced that another Kisan Mahapanchayat will be organized in Chattisgarh, on September 28, by the Kisan Mazdoor Mahasangh.

The SKM has given a call for a country-wide bandh on September 27, in support of the struggle.

In response to the brutal attack on protesting kisans by the Haryana government on August 28, the kisans had issued an ultimatum to the Haryana government to take action against the SDM and other officers who had led the attack on the kisans and were witnessed giving the command to ’break the heads’ of the kisans. The kisans had demanded that the officers be suspended, and a murder case be registered against the offending SDM. They had also demanded a compensation of ₹25 lakh to the family of the kisan who was killed in the attack and ₹2 lakh each to the kisans injured in the state violence.

However, the Haryana government refused to accept the kisans’ demands, even after three rounds of talks with the kisans, and instead endorsed the actions of the SDM. The deadline of the ultimatum expired on September 6th, following which the kisans announced their plan to hold a Mahapanchayat in Karnal on September 7.

The district administration of Karnal imposed section 144 in the area and shut down internet services, and threatened to charge the protesters with section 188 of IPC; i.e., the kisans would be charged with disobedience of the orders of an authority and will be punished with imprisonment of six months, or with fine which may extend to one thousand rupees, or with both. The Haryana government shut down internet services in all the neighbouring districts and diverted traffic from Karnal on the Delhi-Ambala highway, in order to prevent people from reaching the protest site.

Braving the state repression, thousands of kisans gathered at the Mahapanchayat venue in Karnal on September 7, in a massive show of strength and intensification of their protest. They marched to the mini secretariat building about 5 kilometers away and organized a gherao of the Mini Secretariat building. The Samyukt Kisan Morcha (SKM) has announced that they will sit on dharna at the protest site indefinitely, till the government accepts their demands.

The agitating kisans have rejected the government’s lying propaganda that it has hiked the MSP for various crops in the rabi season. They have pointed out that given the rising inflation, the announced hike in MSP amounts to an effective decrease in the procurement price for wheat, gram and many other produce.  The announced MSP hike has not taken into account the rising cost of agricultural inputs, the soaring prices of petrol, diesel, and other daily necessities.

Protests actions of kisans have been also organized in the past few weeks, in Sangrur, Bathinda and several other places in Punjab. In Haryana, kisans staged protests in Jhajjhar, Bahadurgarh, Shahjahanpur, Kurukshetra, Mahendragarh and other places, and burnt effigies of the Chief Minister. SKM has reiterated its stand to oppose all events of the state government and its constituent political parties.

Protest actions of the kisans and in support of the kisan agitation are also continuing in other parts of the country.