On September 24, 2021, nearly one crore ASHA and Anganwadi workers/helpers, school cooks and workers in various government schemes across the country observed a strike. These workers who are mostly women, and are also referred to as ‘scheme’ workers, have been in struggle for several years now but the government has been utterly unresponsive to their demands.

Protest demonstrations and meetings have 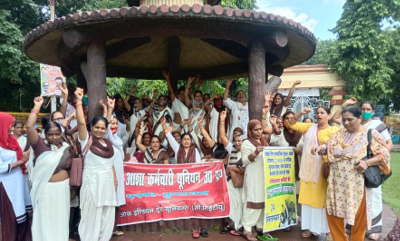 been reported in remote villages, at the district level, as well as in several towns and cities, in Bihar, Uttar Pradesh, Manipur, Assam, Odisha, Kerala, Telangana, Andhra Pradesh, Punjab, Maharashtra, Madhya Pradesh and many other states. Strike actions were also organized in the capital New Delhi and in most Metro cities. Demonstrations, dharnas, and rallies were organised at several district and block government headquarters, and memoranda were submitted to government officials. 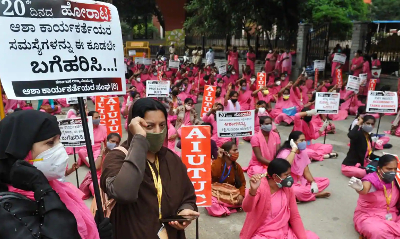 in Karnataka, nearly 42,000 ASHAs, anganwadi workers and mid-day meal workers staged protest actions across the state, including in the capital Bengaluru.

The All Punjab Aanganwadi Workers’ Union organized protest actions in all the districts of Punjab, after which memoranda were submitted to the district authorities. The residence of the state Education Minister in Sangrur was gheraoed for many hours by the striking anganwadi workers, demanding that they be recognized as frontline workers and given all due benefits, as they too had helped to control the spread of COVID-19.

In Kerala, protest actions and meetings were held in a number of places.

The All Jammu & Kashmir ASHA and Anganwadi and scheme workers organized dhanas and protests, defying the army patrolling and curfew-like conditions.

In Assam, over a quarter of the total strength of mid-day meal workers – around 35,000 – staged protests under the banner of the All Assam Mid-day Meal Workers’ Union.  They protested for a raise in the meager monthly remuneration of Rs 1,500, which is not regularly disbursed by the state government. 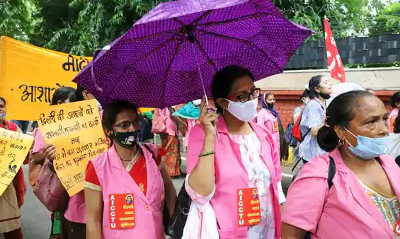 In Delhi, ASHA workers had planned to take out a rally from Mandi House to Jantar Mantar but were denied permission by the Police. They submitted a memorandum to the Union Labour and Employment Minister.

Workers unions, kisans’ and women’s organisations joined the striking scheme workers, to express their solidarity with them. The Samyukt Kisan Morcha, leading the ongoing kisan agitation, gave its full support to the all-India strike of the ASHA and Anganwadi and other scheme workers. 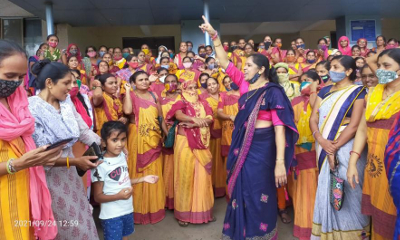 The protests actions and demonstrations in the all-India strike were organized in many places, in the face of heavy state repression and restrictions imposed by the state on public protests, in the name of COVID-19.

ASHAs, engaged under the National Health Rural Mission (NHRM), and Anganwadi workers, who are attached with the Central government’s Integrated Child Development Services (ICDS), are primarily women workers. According to government estimates, there are currently over 10 lakh ASHAs and nearly 14 lakh Anganwadi workers in the country, along with over 12 lakh Anganwadi helpers. In addition, 90% of workers engaged with the school mid-day meal scheme, run by the Ministry of Education, are women. Although these women workers play a crucial role in ensuring the health and nutritional well-being of women and children, and are a vital link in the implementation of the government’s welfare schemes, they have been denied the status of “workers”. They are envisaged as community health “volunteers”, entitled only to task/activity-based incentives over and above a monthly fixed minimum “honorarium”, far below the statutory minimum wages.

One of the main demands raised by the striking workers was that the government should immediately announce a minimum wage of Rs. 21,000/month, along with Employees State Insurance and provident fund to all scheme workers in the country.

The striking scheme workers also sent a letter to the Prime Minister on September 24, demanding better wages and working conditions, safety gear and risk allowance as frontline workers. They demanded that they be recognized as frontline workers and their jobs be regularized, that they be guaranteed the statutory minimum wages, social security and pension. Other demands included Rs 50 lakh insurance cover, coverage for total expenses for treatment for COVID-19 for the entire family, additional COVID Risk Allowance of Rs.10,000 per month for all the contract and scheme workers engaged in COVID -19 duty, compensation of minimum Rupees 10 lakhs for all those who got infected with COVID-19 and died while on duty and payment of all the pending dues of wages and allowances of all the scheme workers immediately. 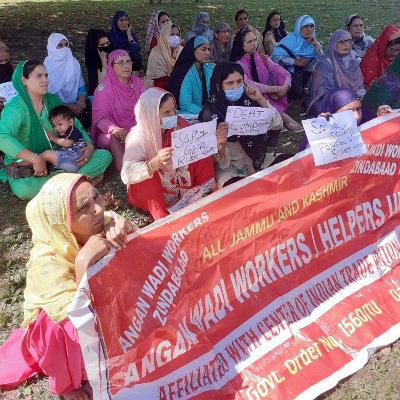 Apart from better working conditions, they demanded greater funds for these schemes to more effectively address the health and nutrition needs of people. The striking scheme workers demanded strengthening of the public health system and the right to universal health care.

Communist Ghadar Party of India fully supports the struggle of the ASHA, Anganwadi and other scheme workers, for their right to be recognized as workers and be guaranteed security of livelihood, remunerative wages, social security and better working conditions.