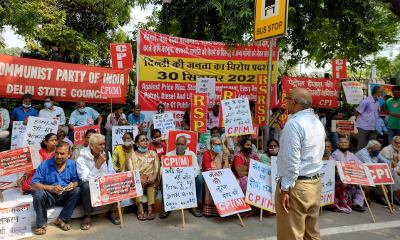 “Bring down the prices of petrol and diesel!”, “Stop price rise!”, “Down with rising unemployment!”, “Ensure minimum wages and social security for all workers!”, “Down with the attack on our right to strike!”, “Down with the sale of public assets to private hands!”, “Revoke the three anti-kisan laws immediately!”, “Revoke the labour codes!” – these and other slogans highlighting the demands of the protestors were prominently displayed on banners. The participants militantly raised slogans in support of their demands.

Representatives of the participating organisations addressed the rally. They criticized the government for having failed to provide health care and other essential services to people during the Covid-19 crisis, leaving people to fend for themselves. In fact, the crisis has been a boon for the biggest Indian and foreign monopoly capitalists, whose profits have soared many times over, they said. The government has used the Covid crisis to crush all forms of dissent and pushed through blatantly anti-people legislations such as the three anti kisan laws and the labour codes.  Speakers raised their voices against the rising prices of petrol, diesel and all essential commodities, against the sale of public sector enterprises to the biggest corporate houses, and demanded immediate removal of the three anti kisan laws and the labour codes.

The rally called upon workers and kisans, women and youth, all over the country, to come together to oppose these attacks and build a powerful resistance movement, to defeat these attacks.