The 10th convention of Delhi Division of All India Loco Running Staff Association (AILRSA) was successfully concluded on 2nd October, 2021 in Delhi. The Chief Guest, Shri Santosh Singh Handa from Lucknow Division attended the meeting. Comrade Ramsharan presided over the convention and the session was conducted by Comrade Suraj Kaushik. 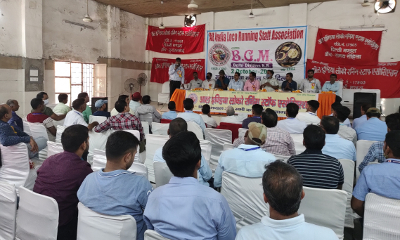 More than 100 delegates from all branches of Delhi divisions participated in this convention. The problems and achievements of the different divisions were discussed in detail. The speakers said that they oppose the steps being taken to privatize the railways. These steps include getting assistant railway drivers to carry out the work of guards, increasing the duty hours, getting more and more work done with less staff, getting diesel engine drivers to run electric engines and electric locomotive drivers to run diesel engines. The loco drivers are opposing all these steps. It was explained that all these policies are anti-national policies and all workers will have to fight together against them. In this session, on behalf of the subject committee of 6 people, Zonal Secretary Padam Singh Gangwar put forth a proposal. A committee of17 people for the Delhi division was elected, which was enthusiastically supported by the delegates present. The office bearers of the committee were also elected. The convention concluded with slogans like “Inquilab Zindabad!” “All India Loco Running Staff Association Zindabad!