As many as 19 different organisations participated in a protest demonstration and public meeting on 1st November at Mandi House, New Delhi, to mark 37 years after the brutal massacre of Sikhs in Delhi and other places in November 1984. The slogans on the main banner of the meeting were: “Unite in the struggle against Communalism and Communal violence!” and “An attack on one is at attack on all!” 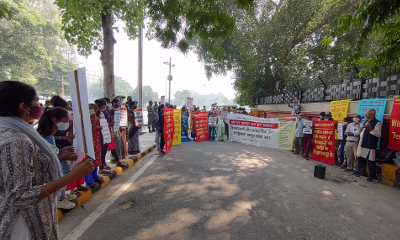 For the past 37 years and more, the Communist Ghadar Party of India has consistently worked to build political unity against state terrorism. We have opposed the official propaganda that blames so-called fundamentalists of this or that religion for communal violence, pointing out that the ruling class is to blame, not any section of the people. We have opposed those who claimed that both sides are to blame, which is a form of conciliating with the official government line.

The genocide of Sikhs was pre-planned and organised at the highest levels of the Indian state. It was aimed at spreading terror among the people and at sowing suspicion between Hindus and Sikhs. It was aimed at diverting public attention from the dangerous course being pursued by the ruling capitalist class in collaboration with Anglo-American imperialism. It served to justify the use of force to suppress mass movements for political and economic demands.

For the past 37 years, people have been demanding that those guilty of organising the massacre of Sikhs in 1984 must be punished. While the party in charge of the Central Government has changed many times, none of the organisers of communal killings have been punished. Today, those guilty of organising communal massacres for achieving their political aims include those responsible for the demolition of Babri Masjid and the communal violence of 1992-93, the Gujarat genocide in February 2002 and many others, including the communal violence in North East Delhi in February 2020.

All the speakers emphasized the fact that the criminal involvement of those in command of this entire operation has been covered up by documenting it as a “riot”. They condemned the politics of communal division of our people. They pledged to uphold the unity of our people and steadfastly oppose state organised communal violence and all forms of state terrorism. They pledged to escalate the struggle for truth and justice, with the perspective of establishing a society and State which will ensure prosperity and protection for all.