On 22nd February, 1993, the opening day of the budget session of Parliament 20 years ago, organisations of workers, women and human rights activists jointly staged a bold protest rally at Ferozeshah Kotla, condemning the criminal deeds of the principal parties in Parliament.  They appealed to all men and women of conscience to take joint action for bringing about a fund

On 22nd February, 1993, the opening day of the budget session of Parliament 20 years ago, organisations of workers, women and human rights activists jointly staged a bold protest rally at Ferozeshah Kotla, condemning the criminal deeds of the principal parties in Parliament.  They appealed to all men and women of conscience to take joint action for bringing about a fundamental change in the political system to empower the people. 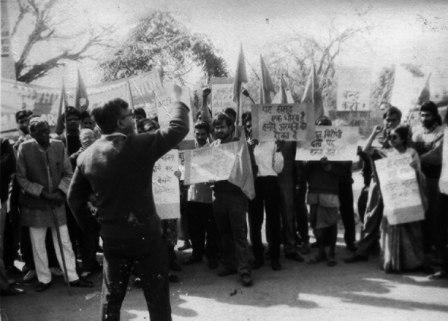 It was a time when the capitalists and imperialists of the world had launched an unprecedented offensive against the working class and against all democratic rights, accompanied by the deafening propaganda that socialism has failed, that there is no alternative to capitalism and everyone better fend for oneself in a globalised market dominated by the monopolies.

Taking advantage of the global situation, the monopoly capitalists in our country had decided to launch India on an imperialist course, under the banner of globalisation through liberalisation and privatisation.  The Congress Party-led minority government of Narasimha Rao and its technocrat Finance Minister Manmohan Singh unveiled this so-called economic reform program in 1991, attacking the livelihood and rights of the toiling majority to fulfil the imperialist aims of monopoly capitalists.  The decade of the nineties began with mayhem and chaos being created by rival parties of the monopoly bourgeoisie, polarising people on the basis of religion and caste, and between so-called communal and secular camps.  The two principal parties in Parliament collaborated in the destruction of Babri Masjid in December 1992.  Over the following several weeks, they incited communal hatred and engulfed the country in communal bloodbaths in numerous places.

With the blood of thousands of innocent people on their hands, the leaders of Congress Party and BJP were gearing up for the budget session of Parliament, to further advance the anti-people big bourgeois agenda as if nothing untoward had happened and it was “business as usual”.  The Narasimha Rao government imposed a ban on all forms of street protests in February 1993, in the name of preventing the BJP from creating trouble, but in fact to prevent any kind of resistance to the liberalisation and privatisation program.  An atmosphere of high tension and police terror prevailed in the capital city.  In such conditions, the rally at Ferozeshah Kotla was like a bright ray of light piercing the dark clouds.

The First Congress of the Communist Ghadar Party of India, held in December 1990, had taken note of the major changes taking place on the world scale.  Resisting the pressure on communists to either openly abandon their goal or become underground terrorists, CGPI decided to work out afresh the tactics and methods of struggle for the proletarian revolution in this new period, in collaboration with the Marxist-Leninist parties of other countries.

The First Congress of CGPI set the task of building the broadest possible political unity of the people against the economic offensive and against state terrorism and communal violence, irrespective of ideological differences.  It set the task of elaborating the most advanced theory and vision of democracy fit for the 21st century, contesting the assertion that “there is no alternative” to the existing system.

Following the First Congress, all party organisations plunged into the work to implement its call to develop revolutionary theory in the course of building political unity against the offensive of the bourgeoisie.  This work led the Party to conclude that supreme power must not be vested in the hands of a few ‘representatives’.  It must be vested in the hands of the people, who should delegate only a part of that power to those they elect.  In other words, parties must not rule in the people’s name.  A modern political party must play the role of enabling the people to rule.  Only if this is achieved can the working class, in alliance with the peasants and progressive intelligentsia, set the agenda and ensure that the economy fulfils the claims of all working families in a planned way.

The Ferozeshah Kotla rally was a product of the untiring efforts of the Communist Ghadar Party to develop the theory and program for the empowerment of the people, and in turn further contributed to that work.

Undeterred by the hordes of armed policemen who outnumbered them, the protestors boldly raised slogans demanding that the guilty parties be punished and not allowed to misgovern the country.  They took a solemn pledge to carry forward the cause of our martyrs and defeat those forces that are poisoning and destroying our society.  They submitted a written appeal to men and women of conscience in Parliament, signed by hundreds of concerned citizens, including former judges of the Supreme Court and High Court, professors and lecturers, journalists, communist party leaders, trade union leaders, leading members of women’s organisations, artists, poets and film personalities.  {The Pledge and the Appeal are being reproduced in this issue for the benefit of our readers – Ed.}

The past 20 years have further reinforced the necessity for a fundamental change in the political system.  The movement for people’s empowerment has grown in strength.  Its influence is spreading among all those who are opposed to the present course.

Today, the principal parties in Parliament are once again resorting to diabolical diversions and monstrous crimes to divert and divide the people, in order to push ahead with the anti-people and imperialist agenda of the bourgeoisie.  Times are calling on all women and men of conscience to rally around the program of Navnirman, of fundamental change in the political system, so that the workers, peasants, women and youth can become the masters and save our country from the disasters that the capitalist class has in store.

An appeal to men and women of conscience

An Initiative by Mazdoor Ekta Committee and Others

By way of introduction

This pamphlet is an appeal to all men and women of conscience, who have been horrified by the mayhem and violence unleashed by the major political parties of our country. It is addressed to all men and women who are deeply concerned about the direction being taken for the economic renewal of the country. !t is an appeal for action to all those who seek a lasting solution to the outstanding problems confronting India, in a direction favourable to her people.

This is the appeal that was submitted by Mazdoor Ekta Committee, Purogami Mahila Sanghatana, Saheli, Punjab Human Rights Organisation and other organisations and individuals on February 22, 1993, the opening day of the Budget session of parliament, to the men and women of conscience in Parliament. The pledge taken by those who participated in a Rally on that same day is also included in this pamphlet.

The initiative of February 22 and the appeal has won the support of many people from different walks of life in India and abroad. The events since February 22, including the tragic bomb blasts in Bombay and Calcutta which claimed so many precious lives, underline the most urgent need for affirmative action by the people themselves in order to put an end to the anarchy and violence that has been unleashed against them.

We are producing and widely disseminating this pamphlet in the conviction that a wide ranging discussion on the substantive issues raised in the appeal is necessary for finding solutions to the problems we face as a country and as a people. It is also our belief that this will ultimately lead to solutions which are not only in the interest of the people, but equally importantly, they will be solutions emerging from the people themselves.

We wish to emphasize that this is a non-partisan initiative, and we appeal to all the men and women of our country, irrespective of their political affiliation or faith to take this initiative forward and make their valuable contribution towards the empowerment of our people.

We, the undersigned, note that this Budget session of the Lok Sabha is being convened at a critical moment in the history of India. The blood of thousands of innocent victims of organised violence has not yet dried on the streets of Bombay, Surat, Delhi and other places, while lakhs have fled their homes, and returned penniless and destitute to the far corners of the country. The people of India have been horrified and angered by these crimes in which the leaders and members of three political parties, the Congress(I), BJP and Shiv Sena, along with senior police and other officials, have been directly implicated.

We note with grave concern that these parties, far from owning responsibility for their crimes, continue to threaten more violence and terror. No action has been taken against those who have participated in this violence. They are seeking to impose their own agenda on the Indian people, in pursuit of their political ambitions. In Parliament the ruling party is trying to push through a series of economic reforms that hit at the very livelihood and security of vast masses of our people. At the same time, along with the BJP and Shiv Sena, it is trying to raise numerous issues to divert the attention of the people from these attacks and other serious problems facing our country.

We demand that the following measures be taken to prevent these parties from imposing their agenda and to protect the well-being and interests of the Indian people:

Pledge to fulfill the aspiration of our martyrs

the descendants of Bhagat Singh, Rajguru and Sukhdev,

the descendants of Azad, Bismil and Bharati,

the descendants of Mangal Pande and Jhansi ki Rani,

the descendants of all those who laid down their lives

for the cause of an India where there shall be no oppression of any kind and where justice shall prevail,