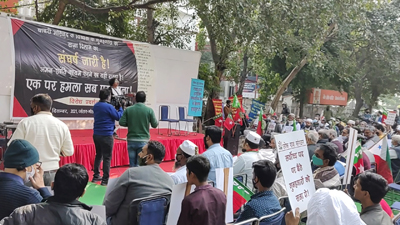 Several political parties and mass organisations held a joint protest meeting at Parliament street on December 6, 2021, on the 29th anniversary of the demolition of Babri Masjid. The meeting upheld the unity of our people against the attempts of the ruling class to divide us. It resolved to continue the struggle for justice and for punishment for all those guilty of such ghastly crimes against our people.

The slogans on the main banner read: “The struggle to punish those guilty of the demolition of Babri Masjid continues!”, “This is the only way to ensure peace and solidarity!”, “An attack on one is an attack on all!”. These summed up the spirit of the protest action. Banners bearing slogans such as “Down with state organized communal violence and state terror!”, “Defend the unity of our people!”, “Punish the guilty!” were mounted on the walls around the venue. 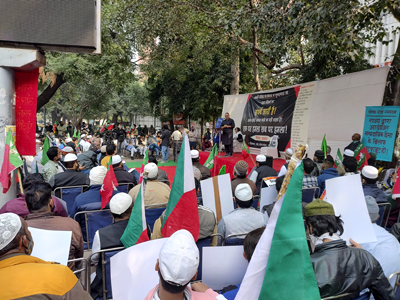 29 years ago, when the Babri Masjid was demolished, the Communist Ghadar Party of India sternly condemned this monstrous crime committed against the people of India by the ruling class and its political parties like Congress and BJP. Ever since, the CGPI has been consistently raising its voice, demanding that all those guilty of the demolition of this historic monument be punished.

Our Party  has consistently pointed out that the Congress-led Central Government and the BJP-led UP Government together supervised the demolition of Babri Masjid. The monopoly capitalist houses who control and dominate the Indian state organised the demolition in order to set Hindus and Muslims against each other and destroy the unity of the workers and peasants against the liberalisation and privatisation program. The Congress Party, BJP and Shiv Sena were all guilty of organising the demolition and the communal killings in Mumbai in 1992-1993, that followed the demolition. But none of them have been punished, after so many years. This confirms that the ruling class was behind the crimes that were committed and these parties were merely implementing the plan of the ruling class. All the organs of the Indian state — the executive, the legislature and the judiciary – have worked in collusion, to cover up the monstrous crime committed against our people and to condone the criminals.

29 years ago, our Party pointed out that the demolition of the Babri Masjid and the communal massacres that followed reflected both the criminalisation of politics and the marginalization of people from political power. To end the criminalisation of politics, it is necessary to bring about changes in the political system and process in order to end the marginalization of people and place decision making power in the hands of the people.

The CGPI has been explaining to the people, that it is not a particular party which is responsible for communalism and communal violence. The ruling class is responsible. The party running the government is merely a management team entrusted by the ruling class to carry out its agenda.

Dividing people on a communal basis and organizing communal genocide is the preferred method of rule of our rulers, regardless of which political party is in power. Its aim is to smash the unity of our people against the all-sided attacks on our livelihood and rights and impose the liberalization and privatization agenda of the big monopoly capitalists.

People who are targeted on the basis of their religious identity have every right to organise themselves in defence of their lives, their beliefs and forms of worship. To call them communal is to blame the victims instead of the perpetrators of the crime.

The struggle to end communal violence must be waged with the aim of ending the rule of the capitalist class and establishing workers’ and peasants’ rule in its place. We must build a new state in which workers and peasants are the decision makers and set the agenda; a state that respects and protects the right to conscience as a universal and inviolable right of every member of society. Such a state will ensure that any individual, group or party that violates anyone’s right to conscience or any other human right is promptly tried and severely punished.

All the speakers pointed out that all those guilty of communal crimes must be held accountable and punished for failing to defend the people’s right to life and right to conscience, no matter what positions they may be occupying in the state administration.

The meeting concluded with the protestors raising slogans reaffirming the unity of our people and pledging to continue the struggle for an end to state-organised communal violence and state terror.