Hundreds of contract workers working in the government health services all over Uttar Pradesh, employed under the National Health Mission (NHM), have been on an indefinite strike since the beginning of December, 2021. The strike has been called by the National Health Mission Contract Employees Union, demanding ‘equal pay for equal work’, i.e. pay parity with regular workers, pay revision, regularisation of jobs, a humane transfer policy, Covid-19 health insurance benefits as well compensation for workers who contracted Covid-19 at work. 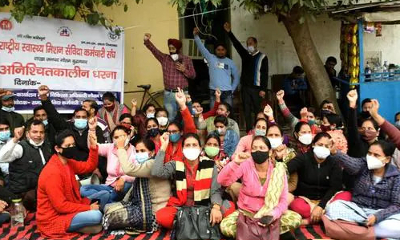 All contractual paramedical employees of NHM, including nursing officers, pharmacy officers, auxiliary nurse midwives (ANMs), lab technicians, dental technicians and other Class IV employees have raised the issue of pay discrimination between themselves and their regular counterparts. Despite repeated protests over the past several years, their demand for equalisation of pay and regularisation of jobs has not been met.

NHM workers comprise over 80% of the health department’s manpower in most districts of UP. They include Accredited Social Health Activist (ASHA) workers who have been working on the frontlines of surveillance, contact tracing, testing, sampling, and managing Covid-19 patients ever since the outbreak of the pandemic.

The protesting NHM contract workers have been sitting on dharna at the office of the Chief Medical Officer (CMO) in Lucknow. In other parts of the state, they are protesting outside the offices of CMOs in their respective districts. 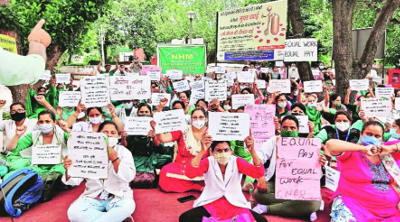 For the past 10-12 years the NHM contract workers have had no pay revision, the striking workers have said. They have pointed out that a NHM contract worker is paid a mere Rs 12,000-15,000 per month, a salary on which it is impossible for them and their families to survive. Even though these workers risked their lives and health and worked long hours during the Covid-19 pandemic, often without adequate protective gear, they continue to be the victims of such severe exploitation. Since they are contract workers, they also face grave insecurity of livelihood. They have protested several times, including during the second wave of the pandemic, but their demand remains unheeded by the authorities.

The NHM contract workers’ strike has been supported by all the permanent employees, including senior doctors, some of whom expressed their view that “Most of the Covid-19 fieldwork was done by the ASHA workers. The entire pandemic was fought with their help. It is only fair to address their grievances.”

Meanwhile, NHM contract health workers in Bhatinda, Punjab are also reported to be on indefinite strike since the last week of November and have raised the same demands. NHM contract workers in other parts of the country have also been consistently protesting against their severe exploitation.