The year 2021 witnessed numerous militant struggles of workers in defence of their livelihood and rights and against their increasing exploitation.

Workers belonging to different branches of the economy increasingly came together to fight against the attacks on their rights unitedly. They defied the attempts to divide them on the basis of political party or trade union affiliation.

Workers raised their voice against the four new labour codes and the denial of their rights won through long struggle – for security of livelihood, for the right to form unions, the right to strike, etc.

Workers in many sectors fought for better wages and working conditions. They fought against the threats of closure and retrenchment.

Workers of public sector enterprises came onto the streets to oppose privatisation. Public sector workers in banking, insurance, electricity, railways, steel, coal, airports, Air India, port and docks, roadways have opposed the attempts of the government to hand over assets created with public money to the biggest monopoly capitalists for a pittance, in order to enable them to make fabulous profits and loot the people.

ASHA and Anganwadi workers fought to be recognized as workers and be given due remuneration. Doctors, nurses and health workers fought for better wages and working conditions, and against the privatization of health services, depriving crores of working people of health care. Teachers opposed the attempts towards privatisation of education, which is making education unaffordable for vast majority of children and youth.

We present below a brief overview of some of the significant struggles in 2021. 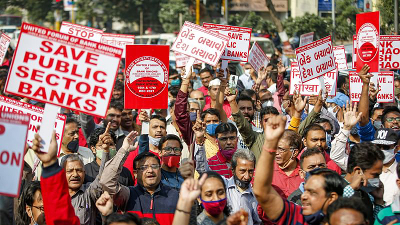 Nearly 9,00,000 of workers went on a two-day all-India strike on December 16-17. The strike call was given by the United Forum of Bank Unions (UFBU). The bank workers were opposing the government’s decision to pass the Banking Laws (Amendment) Bill, 2021 during the ongoing winter session of Parliament. Through the strike, bank workers expressed their determination to defeat the anti-national and anti-social plan of the bourgeoisie to transfer ownership of public sector banks into private hands, to enable monopoly capitalists to rake in maximum profits. Bank workers have carried out an all-India campaign to explain to the people how and why privatisation of banks is against the interests of the public and of society as a whole.

The struggle of the bank workers has resulted in the government’s last minute decision not to place the Banking Law Amendments Bill before parliament. 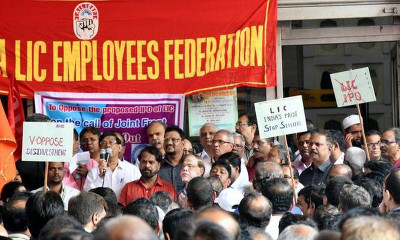 Insurance employees have been waging a struggle against the proposed privatisation of the General Insurance Company and against the increase in FDI limit for insurance sector to 74% from 49%. They organized an all-India strike on 17 March 2021.

The workers of India’s defence industry have been protesting against the corporatization of the Ordnance Factory Board. The government implemented corporatization overriding the united opposition of the workers of the ordnance factories and other defence industry workers. When workers threatened indefinite strike, the government promulgated the Essential Defence Services Ordinance (EDSO) 2021 on June 30. This was later rubber stamped into a law by parliament on July 23, 2021. This law bans strikes by workers involved in the production of defence equipment, services, maintenance and operation of defence establishments. It threatens workers who go on strike with dismissal and arrest.

Workers in all the ordnance factories and other defence establishments organized protest actions at their respective workplaces against the ordinance. Government workers and other public sector workers in Rajasthan, Punjab, Chhattisgarh, Kerala, Tamilnadu and many other states came out in support of the defence workers and in opposition to the attack on the right to strike. Trade unions and workers’ organisations all over the country held demonstrations on July 23 in support of defence workers. 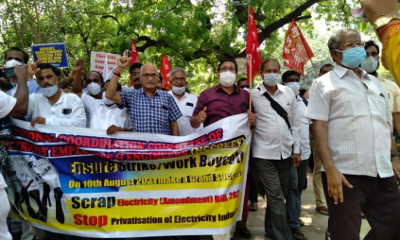 Electricity workers under the leadership of the National Coordination Committee of Electricity Employees & Engineers (NCCOEEE) organized a four-day strike and protest action at Parliament in New Delhi on August 3-6, 2021. They demanded that the Electricity (Amendment) Bill, 2021, which was to be tabled in the monsoon session of Parliament, should be scrapped. They also demanded that the Centre should cancel all existing private licenses and franchises in power sector and completely withdraw the process of privatisation of electricity in states and UTs. Earlier, on July 19, they had organized protest actions across the country. They have carried out an all India campaign to explain to people the adverse consequences of privatisation of electricity distribution. In particular, the electricity workers carried out a campaign to explain to the farmers how the government was planning to end subsidy of electricity to rural areas.

In the face of the militant fighting mood of electricity workers, the government has not yet tabled the Electricity Amendment Bill in parliament. 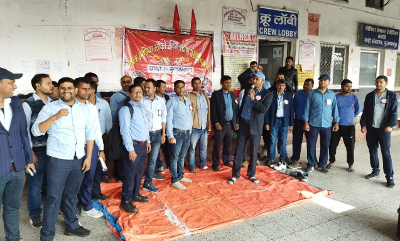 Workers in different sections of the Indian Railways – engine drivers, station masters, trackmen, guards, etc. – have been agitating against the various steps that are being taken towards privatization of the railways. They are fighting against the inhuman conditions of their work. They are demanding recruitment of new workers in the vacant posts to ease their current workload. From December 7 to 9, the All India Loco Running Staff Association held protest actions all over India to press for their pending demands.

Thousands of railway workers held protest marches and demonstrations across the country during September 13-18. They were protesting against the government’s decision to privatise various assets of the Indian Railways under the central government’s “monetization” program. 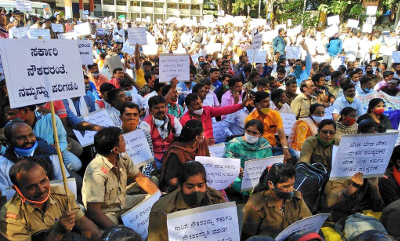 State transport workers in Himachal Pradesh, Maharashtra, Karnataka, Rajasthan, Tamilnadu and other states have been coming out in protest, demanding their rights. Maharashtra State Road Transport Corporation (MSRTC) workers have been protesting against the imposition of MESMA on the striking workers and suspension and dismissal of their workers for participation in a strike action in October this year. Rajasthan roadways workers went on strike in October demanding pay revision and recruitment to vacant posts. Tamilnadu state road transport workers went on strike in November demanding wage revision and payment of past dues. Himachal Road Transport Corporation (HRTC) workers went on strike in June 2021, demanding regularization of contract workers. 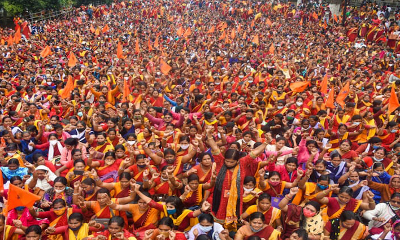 On September 24, 2021, nearly one crore ASHA and Anganwadi workers/helpers, school cooks and workers in various government schemes across the country observed an all-India strike.

ASHA and Anganwadi workers are demanding that they be recognized as workers and be paid the statutory minimum wages along with other benefits such as paid sick leave, maternity leave, gratuity, pension, etc.

ASHAs do not get fixed salaries like regular workers. They are paid incentives by the government for their services. Special incentives were promised to them during the Covid-19 pandemic, when they have often worked for long hours, without adequate protective gear, risking their lives and health. However, they have not been paid their incentives. In August 2021 ASHA workers staged a huge protest action at Parliament in New Delhi, demanding payment of their dues.

Over the past year, ASHA workers have carried out many strikes and protests in many states, including Odisha, Gujarat, Haryana, Karnataka, Kerala, Madhya Pradesh and Punjab. 70,000 of them went on strike in June 2021 in Maharashtra, demanding higher pay, regularisation of work and social security. 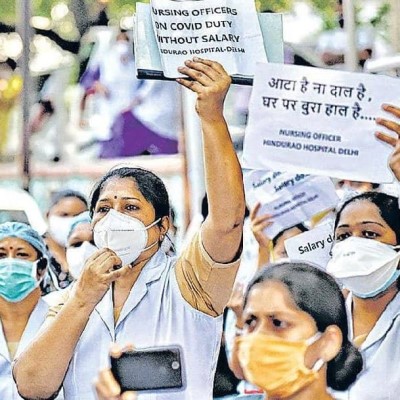 Nurses, Resident Doctors, and other health workers have participated in many struggles in different parts of the country. They have highlighted their problems including long hours, poor working conditions, low salaries. In the hospitals run by the Municipal Corporation of Delhi, doctors and nurses have had to go on strike repeatedly in order to get their wages.

In the beginning of July, hospital nurses went on strike all over the state of Madhya Pradesh. Nurses from National Health Mission (NHM) also joined the strike. The nurses demanded wage increase along with other pending demands. 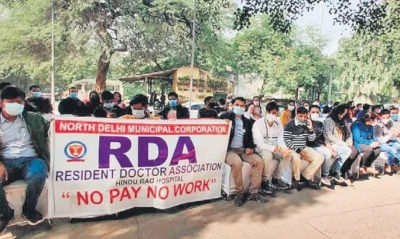 Hundreds of contract workers working in the government health services all over Uttar Pradesh, employed under the National Health Mission (NHM), went on an indefinite strike in the beginning of December, 2021. The striking workers were demanding pay parity with regular workers, pay revision, regularisation of jobs, a humane transfer policy, Covid-19 health insurance benefits as well compensation for workers who contracted Covid-19 at work.

Meanwhile, doctors in Delhi and other cities organized under the Federation of Resident Doctors Association (FORDA), have been protesting against the delay in NEET-PG counselling, as a result of which recruitment of new doctors in the hospitals has been held up and the workload of the doctors currently working has increased. 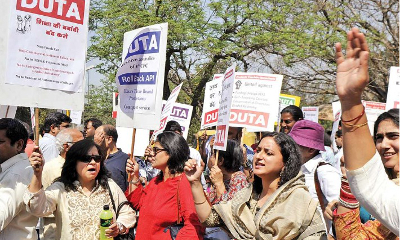 Teachers in all central and state universities organized several protest actions against the New Education Policy and the moves towards privatization of higher education. They also demanded that all posts which have been lying vacant for years should be filled with new appointments and that contract and ad-hoc teachers should be regularized.

Teachers in municipal schools of Delhi came out in protest against non-payment of their salaries for many months. Guest teachers have been agitating for higher remuneration and for regularization of jobs.

The year 2021 saw trade unions and workers’ organisations coming together in many joint actions, to oppose privatization and the growing attacks on their rights. There is growing unity of workers in the struggle against the present orientation of the economy which is directed only at fulfilling the greed of capitalist monopolies and not people’s needs. The united struggle of workers must be directed at establishing a system in which the workers and peasants, who constitute the overwhelming majority of society, will be the decision makers and the economy will be oriented to fulfil peoples need.