The year 2021 ended with a major strike by resident doctors across India — in Delhi, Rajasthan, UP, Tamilnadu, Kerala, Karnataka, Andhra Pradesh and Telengana.  Resident doctors bear the brunt of direct patient care in hospitals at all times. But in the time of the coronavirus pandemic, the burdens on them have increased multiple times.  On the one hand the government has urged the public to “taali bajao” for the doctors and other health workers and has hailed them as “corona warriors”.  However in reality, the government has shown no concern for them or their problems, forcing them to come out onto the streets in protest.

Why did the resident doctors go on strike? 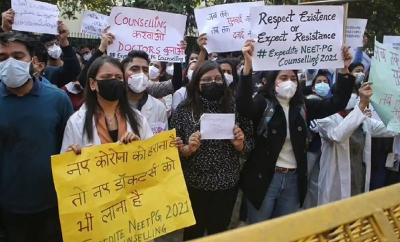 The immediate cause for the anger of the resident doctors is that more than 50,000 vacancies are not getting filled, leading to a tremendous overload of work on them.  This is entirely due to the government’s failure to come out with a coherent policy on the conduct of the NEET (National Eligiblity cum Entrance Test) for post-graduate medical education.  Citing the coronavirus pandemic, the Test was postponed twice, from January 2021 to April, and then to September, when it was finally held.  Then the counselling to fill up the seats in the post-graduate medical education institutions has been delayed because of changes in government policy on reservation of seats and the intervention of the courts.  As counseling was delayed, the first year PG medical students could not be admitted which had a cascading effect on the medical workforce as first year PG resident doctors constitute 33% of the medical workforce.

As a result, there is no new set of entrants to the medical colleges who would assume the function of first-year resident doctors and share the work of patient care.  The current set of resident doctors are thus being forced to take on the extra burden of caring for patients.

The demand of the protesting resident doctors was that the government should first give the green light for the counselling process for entrance into the medical colleges, and let changes in policy be taken up later.

Resident doctors have been under tremendous stress particularly in the last two years.  They are known to work 18 hour shifts with no proper arrangements for food and drink or for taking breaks.  As cases of Covid-19 requiring hospitalisation soared during the past year, it was mainly the resident doctors who had to provide direct care, along with nurses, ward attendants and others.  However, they are grossly underpaid for the invaluable work they are doing, and during the pandemic many received only delayed or reduced salaries.  While putting themselves and their families at the greatest risk of contracting the infection, they were in most cases not given adequate protective equipment.  In these conditions, the indefinite delay in the induction of the new batch of resident doctors has been the final straw.  The resident doctors gave notice to the government and health authorities numerous times, with no result.  Then, when the doctors finally came out onto the streets, many of them were beaten up and dragged off to the police station as happened in Delhi on December 27.

After keeping the doctors aspiring for post graduate medical education in great uncertainty over their future for several months, the Supreme Court in an interim order on January 7, 2022, allowed resumption of medical counselling for the 2021 NEET-PG examination.

The problem faced by the resident doctors is part of the larger problem of the state’s callous disregard over the years for public health.  The government spends far less on health per capita or as a proportion of the GDP than most other countries, including many poorer countries.  This has remained a constant despite numerous changes of governments.  The health and wellbeing of the people is of least concern to the ruling class.  Moreover, there has been a deliberate policy of handing over health care and medical education to the private sector as an arena where they can make maximum profits.  In a country with such a vast number of poor people, this is nothing less than criminal.  Clearly, the lessons learnt from the huge suffering caused by the inadequate infrastructure to deal with the pandemic has changed nothing.