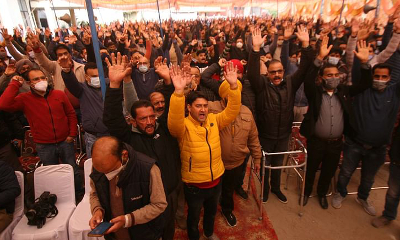 ﻿The striking workers of the Jammu & Kashmir power sector celebrated a hard-won victory on 21st December 2021. They had called for a boycott of work beginning 17th December midnight when the government did not meet their demand to halt the steps taken towards privatisation of the power sector in the union territory.

Power sector reforms were rolled out in Jammu & Kashmir in 2019, with the formation of separate transmission and distribution corporations for the Jammu and Kashmir divisions. On 4th December 2021, the government announced the privatisation of power assets through a joint venture company of its transmission and part of distribution corporation, the Jammu Kashmir Power Transmission Corporation (JKPTCL) with Power Grid Corporation of India.

The work boycott was called by the All J&K Power Employees and Engineers Coordination Committee (JKPEECC), the coordination committee of all associations and unions of Power Employees & Engineers of J & K. The Committee had sent a letter to Principal Secretary of Power Department of J & K expressing their disagreement with the move. They had requested the Government to put on hold the move and to initiate dialogue with the Coordination Committee. When the government refused to meet their demand, the power workers continued with their state-wide boycott. The JKPEECC declared that it would remain firm on its stand that the Joint Venture Company with the Power Grid Corporation of India will not be allowed in any circumstances in Jammu & Kashmir. 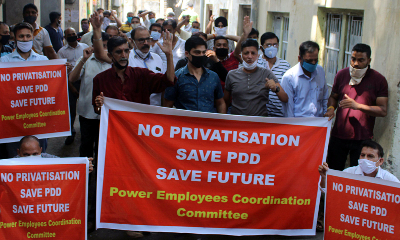 The remarkable feature of the strike was that it was total across the whole of Jammu & Kashmir. Major parts of J&K were in darkness due to failure of power supply in the absence of the power employees, including engineers. Despite police raids on the residences of the leaders of the coordination committee, the workers stood unafraid. They actively mobilised the people in support of  their cause, aware that their boycott of maintenance activities had caused great hardship to the people. The members of the committee led from the front, camping with the workers on strike across the state. The government issued threats of termination and dismissal, but the workers stayed united and firm in their resolve.

The coordination committee had decided that if any employee was arrested or any punitive action was taken against any employee, the nearly 21000 power employees and engineers from Jammu and Kashmir would court mass arrests in the district headquarters and any consequences of this would be the responsibility of the government.

On 21st December, the strike was called off after the government agreed to halt the process of privatisation. The government also agreed to constitute a committee that would include representatives of the JKPEECC to recommend reforms in power sector.

The government also guaranteed timely disbursement of salary and other demands of the power sector workers regarding the regularisation of engineers and working conditions of daily-wage workers. It promised the workers that these issues shall be resolved in a time bound manner.

The strike reflected the unity of the more than 20,000 workers in the UT’s power sector. It also got extensive support from power sector workers in other states. Electricity workers in Leh, Telengana  and Uttarakhand went on strike in support of the workers in J&K.