On 11th January 2022, the workers of the Electricity Department of the Union Territory (UT) of Chandigarh held a massive rally and demonstration, under the banner of the UT Powermen Union, to oppose the privatisation of electricity distribution in the UT. They also demanded the implementation of revision of pay scales and the release of the Promotion Orders of the employees. These orders had been stopped despite the availability of posts and eligibility. 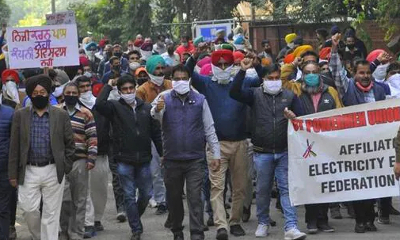 During the rally a delegation of leaders presented a memorandum to the Governor of Punjab as well as to the Administrator of Chandigarh, demanding that the proposed privatisation of electricity distribution should be withdrawn. They appealed to all the people’s organisations and political parties to support the struggle of the electricity workers and strongly oppose the policy of privatisation. A widespread mass contact campaign to mobilise people in their support is being planned by educating them about how their interests will be greatly harmed if privatisation of different sectors and utilities is carried out. Already, all the Resident Welfare Associations of the UT have expressed their opposition to this move by the central Government.

In the middle of the Covid wave, in May 2020, the finance minister unilaterally announced that electricity distribution in the union territories (UT) will be privatised. Chandigarh, where the Electricity Wing of the Engineering Department of the UT Administration is carrying out the service of transmission, distribution and retail supply, was chosen as the first UT for privatisation. The proposal was challenged in the Punjab and Haryana High Court on the ground that there is no provision in the Electricity Act that permits such a privatisation process. The High Court was also told that the process of privatisation of the department could not be initiated at all, especially when it was running in profits. The sale of 100 per cent stake was unjust and illegal as the department was revenue surplus for the past three years. It was economically efficient, recording transmission and distribution losses less than the target of 15 per cent fixed by the Ministry of Power. The Court stayed the tendering process on 1st December 2020, declaring it “unjust and illegal;” however, on 12th January 2021, the Supreme Court overruled the stay and allowed the privatization process to continue. After the Administration restarted the process, the UT Powermen Union again filed a petition in the High Court which ruled to stay the process on 28th May 2021, but the order was stayed by the Supreme Court on 28 June 2021. The tendering process was resumed. 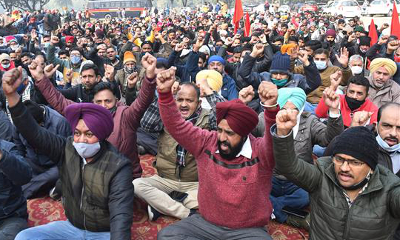 In January this year, the Central Government has approved the bid of Rs. 871 crores of Eminent Electricity Distribution Limited, a subsidiary of Calcutta Electricity Supply Corporation (CESC) of Goenka group. CESC is a private monopoly electricity distributor in Kolkata, where it distributes power at one of the highest rates in the country. The Central government fixed a paltry reserve price of only Rs 174 crore whereas the real value of infrastructure created over the years with people’s money is believed to be around Rs 20,000 crore. Further, the Ministry of Power has proposed that the assets of UT Chandigarh for which the cost data is not available in the asset register may be transferred to the private party at a nominal cost of Re one.

Meanwhile, Deloitte which has been appointed Consultant for the entire process, is chalking out the plan for conversion of the department into a company. Thereafter, agreements, including share agreement, will be signed and shares of the newly created company will be transferred to the private company.

It should be noted that the transmission and distribution losses are less than 10% in this UT, and it is a very profitable government undertaking. It made a profit of Rs 365 crore in the previous financial year and has been consistently profitable despite one of the lowest power tariffs in the country.  The price quoted for such huge assets will be recovered with profits within less than three years!

The argument that is given by the government that it is selling only loss-making units is patently false. A private company cannot even think of buying something that will not multiply its profit or potential profit by way of acquiring assets like land and equipment! People of Chandigarh rightly fear that power rates will soon at least double in Chandigarh after privatization.

The 11th January mass rally unanimously decided to observe one-day strike on 1st February in all the shifts and a further 2-day strike on 23rd-24th February 2022. Further, the rally  decided that if the Administration decides to hand over the functioning before the said date without protecting interests of the employees, then indefinite strike will be observed immediately; in that case the Administration will be fully responsible for any inconvenience to the public at large due to strike.

Another mass rally was organised in Chandigarh on 24th January at the call of the UT Powermen Union. Workers attended in large numbers despite the biting cold and rain on successive days.

Many leaders of the UT Powermen Union, including the union’s President and the General Secretary addressed the rally. They declared that in view of the stubbornness of the government and administration in going ahead with the privatisation moves, the workers had no option but to strike on 7th February as well as on 1st February as decided earlier and also take part in the All-India General Strike on 23rd-24th February.

The United Forum of Employees and Engineers of Pondicherry also resolved on a solidarity strike in support of the striking power employees of Chandigarh. The struggle of Chandigarh electricity workers was further strengthened by the decision of the NCCOEEE (National Coordination Committee of Electricity Employees and Engineers) to organise massive nation-wide protests and demonstrations on 1st February in solidarity with the Chandigarh, as well as, the Pondicherry power employees and engineers. Memoranda addressed to the Lieutenant Governors of both the UTs will be sent from all states under NCCOEEE banner. The main leaders of the National Federations will be physically present at Chandigarh to address the massive demonstration there with mobilisation from the adjacent states like Haryana, Punjab and Himachal Pradesh. Similar mobilisation will also take place at Pondicherry.

Leaders of the CITU Chandigarh, Federation of UT Employees Union, Horticulture Union, ICCW, Punjab Board Corporation Federation expressed their support to the electricity workers and spelt out the harmful effects of privatisation on the people at large who are the users and consumers.

Electricity is a basic necessity of life today. It is the state’s duty to provide it at affordable rate to everyone. Electricity cannot be allowed to be a source of super-profits for monopoly capitalists. The state has also no right to sell assets built with people’s money for private profiting.

Over the past year the workers in the power sector have been on the warpath. Those in the states of UP, MP and Uttarakhand as well as in Jammu & Kashmir have struck work and won their demands. Now it is the turn of the electricity workers of the union territory of Chandigarh to push forward the struggle against privatisation.