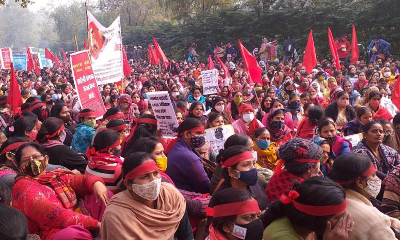 Thousands of Anganwadi workers and helpers, staged a demonstration under the banner of Delhi State Anganwadi Workers and Helpers Union (DSAWHU) near Delhi Chief Minister Arvind Kejriwal’s residence on 31st January. Earlier in the day, they had launched an indefinite work strike to protest against the Aam Aadmi Party (AAP) government in the national capital. The first day of the work strike saw a complete boycott of activity performed by workers and helpers in close to 70% of the Anganwadi centres in the city.

There are above 10,000 government-run day care centres under the Integrated Child Development Services (ICDS)-administered Anganwadi scheme, which caters to over one lakh children and women in Delhi. These centres are manned by 22,000 Anganwadi workers and helpers. 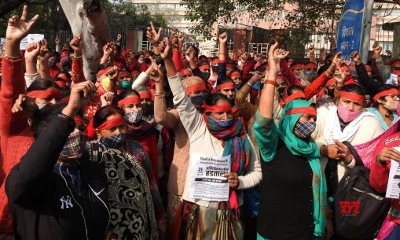 Faced with sharp rise in prices of essential items, the striking workers and helpers pointed out that the Delhi government had last raised their honorarium in 2017 in the backdrop of a work strike, which persisted for 58 days back then. The striking workers further pointed out that their workload at the Anganwadi centres had increased. The escalation in prices and increased workload were not accompanied by an increment in the honorarium of the all-women workforce in the city.

The protesters also criticised the central government for not ensuring the payment of an increment announced in 2018 for the Anganwadi workers and helpers across the country.

The union has been repeatedly raising these demands, but the government had not addressed them. Last September, the women workforce, led by DSAWHU, has staged a warning protest at the Delhi Secretariat, followed by a one-day strike in January this year. 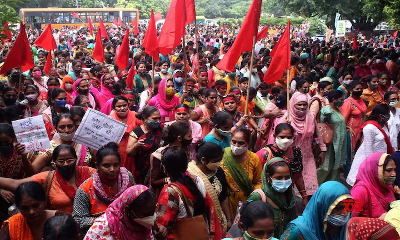 Among their major demands is an increment in their honorarium to Rs 25,000 and Rs 20,000 for Anganwadi workers and helpers, respectively, along with payment of arrears for 39 months – from October 2018 to January this year – of the honorarium hike that the PM had announced. Currently, in Delhi, Anganwadi workers and helpers, while bereft of an “employee” status, are entitled to Rs 9,698 and Rs 4,839, respectively. DSAWHU, the union spearheading the ongoing movement, also demanded retirement benefits for the Anganwadi caregivers and a provision of Employees’ State Insurance (ESI) and Provident Fund (PF).

This is the condition of Anganwadi workers throughout the country – despite incessant demands from them across states and UTs, they have not been recognised as government employees and paid salaries as per the state government scales. They are paid an honorarium which is far below the lowest minimum wage in the country and they have been denied their right to retirement benefits.

“We will completely and actively boycott the parties that do not promise in writing to fulfil all our demands within a stipulated time frame in the upcoming MCD polls,” president of DSAWHU, said while addressing the protesting women.