Ukraine has become the latest pawn in the efforts of the Anglo-American imperialists to isolate and militarily encircle Russia. 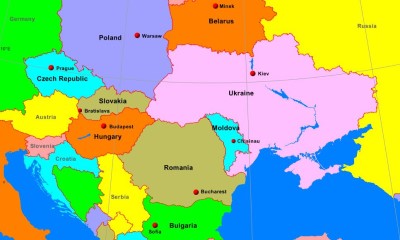 The US and British imperialists have mounted a massive international diplomatic and media campaign against Russia, accusing Russia of planning to invade Ukraine. This campaign has been going on since the beginning of December 2021. As part of this disinformation campaign, US intelligence agencies even announced February 15 as the date of the alleged Russian invasion! The US withdrew its embassy staff from Ukraine and issued instructions to US citizens in Ukraine to leave the country immediately.

Russia’s Foreign Ministry spokesperson Maria Zakharova said: “February 15, 2022 will go down in history as the day Western war propaganda failed. Humiliated and destroyed without a single shot fired.” However, this did not stop US President Biden telling the media on February 17 that “we have reason to believe they are engaged in a false flag operation to have an excuse to go in. Every indication is that they are prepared to go into Ukraine, attack Ukraine. My sense is it will happen in the next several days.” In other words, the US will continue its war mongering propaganda campaign against Russia.

Speaking at the Munich Security Conference held during February 18-20, British Prime Minister Boris Johnson declared that the possibility of Russia invading Ukraine presented the biggest danger to peace and democracy in the world.  He hypocritically stated: “Russia has nothing to fear from our vision, which threatens and marginalizes no one.”  His statement is completely contradicted by the track record of the Anglo-American imperialists in launching unjust wars and forcibly occupying independent countries, with Iraq and Afghanistan being two recent examples.

Speaking at this conference, US Vice President Kamala Harris threatened Russia with dire consequences.  She said, “We will target Russia’s financial institutions and key industries. And we will target those who are complicit and those who aid and abet this unprovoked invasion”, referring to the as yet hypothetical Russian invasion of Ukraine.

Russia has repeatedly denied any plans to mount an invasion of Ukraine. On the other hand, it has accused the US of threatening Russia and attempting to encircle Russia by stationing NATO troops in all the border countries. Specifically, it has demanded that the US publicly declare that Ukraine and Georgia will never be part of NATO. It has demanded an immediate halt to the deployment of missile systems on Russia’s borders and the removal of US troops and infrastructure from the Central and East European countries that joined the NATO alliance after 1997.

These demands of Russia are just, but the US has consistently rejected them. At the same time, it is clear that leading European countries, like Germany and France, are not at all in agreement with the belligerent attitude of the US and Britain. The leaders of Germany and France have been engaged in discussions with the Russian government to find a way out of the crisis. Despite Anglo-American pressure, Germany has refused to send its military equipment to Ukraine. Top political and military leaders of Germany have publicly indicated that the concerns raised by Russia are justified and need to be addressed. The economic interests of these European countries, and especially their supplies of oil and gas, will be badly hit if the US-Russia confrontation over Ukraine escalates any further.

In accusing Russia of planning to invade Ukraine, the US wants to cover up its own plans against Russia. President Putin has accused the US of trying to organise false flag operations against Russia, provoke Russia into retaliating, and use this as a pretext to militarily attack Russia. This cannot be ruled out, as this is the method that the US has used many times in the past to justify its military aggression overseas.

Behind the high decibel warmongering propaganda of the US, there is another sinister aim as well. The US has always used NATO to keep Germany down and maintain its domination over Germany and the whole of Europe. To break out of US domination, Germany needs to establish a strategic partnership with Russia. Russia and Germany are together building the NORDSTREAM -2 gas pipeline which will supply gas from Russia directly to Germany via the sea. The US imperialists want to block the possibility of Germany and Russia establishing a strategic partnership.

The hysterical warmongering by the US has put Ukraine in a difficult spot.  The current President of Ukraine, Zelensky went on record on CNN saying “it is not certain that an attack will take place,” and urging Biden to “calm down the messaging.”  The secretary of the Ukraine National Security and Defence Council Danilov said that Russian military maneuvers along the border take place “all the time”, adding: “This is their territory, they have the right to move left and right there. Is it unpleasant for us? Yes, it’s unpleasant, but it’s not news to us.”  This is clear confirmation that the hysteria about the imminent invasion of Ukraine by Russia has emanated straight from the White House, and is not in keeping with the ground reality on the Ukraine-Russia border.

Ukraine was the second most populous Republic of the former Soviet Union, after Russia. Ever since the disintegration of the Soviet Union, US imperialism has been trying to extend its domination over the former socialist countries of Eastern Europe, and the countries that emerged from the breakup of the Soviet Union. One of the main methods of achieving this aim is to make these countries members of the NATO military treaty and station US armed forces in them.

Over the past two decades, Russia has been increasingly resisting US attempts to surround it with pro-US regimes. US imperialism has consequently stepped up its efforts to detach Russia from its neighbours. Where it has encountered governments in the neighbouring states that continued to maintain friendly ties with Russia, it has engineered so-called coloured revolutions.  It  has financed, armed and set into action fascist groups within these countries to stage street protests, unleash anarchy and violence, to bring those governments down and replace them with pro-US regimes.  In this way, in Ukraine in 2014, the US imperialists worked to bring down the elected government of Viktor Yanukovych, and replace it with a regime subservient to itself.

Ukraine and Russia have long ties of history and culture going back several centuries.  These ties were strengthened when they were part of one socialist country during the Soviet period and when they fought together to beat back the Nazi invasion during World War II.

Ukraine and Russia share a border that is over 2000 kms long.  About 30% of the population of Ukraine are native Russian speakers, especially in the southern Donbas region which includes the Crimean peninsula on the Black Sea.  When the US-organised coup in the Ukraine took place in 2014, some regions of the Ukraine declared their independence and held referendums to join with Russia. The people of Ukraine have refused to accept the US-organised coup and the resulting civil war in the country.  People of Ukraine do not want to be embroiled in a war against Russia to serve US imperialist aims.

The people of India must not fall for the lying Anglo-American propaganda which paints Russia and China as the main threats to world peace and security.  This propaganda is aimed at hiding the truth that US imperialism is the greatest threat to world peace and security. The peoples of the world must demand an end to US imperialist warmongering against Russia over Ukraine.