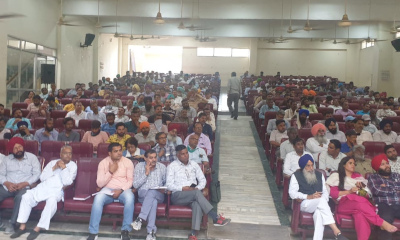 A delegation of Mazdoor Ekta Committee (MEC) participated in the Convention.

The proceedings of the Convention began with the presentation of a resolution on behalf of the NCCOEEE. The resolution hailed the February 22-24 strike by the power sector employees of Chandigarh. It condemned the government’s plans to hand over the power department’s assets, installations and network to private companies all over the country. It called for withdrawal of police cases against the striking workers and for restoration of jobs of the contract workers who had militantly participated in the struggle and were terminated for that. It called for scrapping of the Electricity Amendment Bill 2021 and hailed the kisan andolan for its heroic resistance, which led to the bill not being passed in parliament. It hailed the struggle against privatisation waged by the power sector workers of Punjab, Haryana, UP, Uttarakhand, J&K, TN and other states. It called for strengthening the unity of the workers and supporting the struggle of the power sector workers against privatisation, in all states. It called for wide mobilisation in support of the All India strike by trade unions on March 28-29.

The issues raised by the speakers included the demand for pay revision and the need to mobilise widely for the all-India strike on March 28-29. They highlighted the fact that power privatisation will affect all the consumers, in fact the whole of society, in the form of increased tariffs, less accountability, poorer service, lack of service to the far flung and poorer regions of the country, etc. They highlighted the need to vigorously oppose the privatisation plans of the government for the power sector. They drew inspiration from the kisan andolan, which had held out its agitation for a long period, with great resolve and braving enormous hardship. They thanked all the organisations who have supported the Chandigarh power workers’ and engineers’ struggle and their struggles all over India. They expressed their determination to step up the struggle.

Santosh Kumar of MEC expressed wholehearted support for the struggle of the power employees and engineers. He highlighted the struggle of MEC against privatisation in all sectors, starting from the case of Modern Food in 2001, and right up to the present time. He pointed that every government has implemented the agenda of privatisation of public assets and services, in the interest of the biggest Indian and foreign monopoly capitalist houses.  The source of the problems facing society was the capitalist system and the rule of the bourgeoisie. The working class needs to take over the principal means of production from the hands of the bourgeoisie and place it under social control.  Then the economy can be reoriented to fulfil the growing needs of the people. The solution lies in establishing worker-kisan rule, he said, in which we will have the power to take decisions and make laws, hold our elected representatives to account or recall them and to ensure sukh and suraksha for all.

The Convention was an important step in summing up the experiences and lessons learnt, from the February 22-24 strike of the electricity employees and engineers in Chandigarh, in order to take the struggle forward.