More than 3000 railway workers of the Canadian Pacific Railways (CP) are waging a struggle for a new agreement with the company on wages, pensions, other benefits, and work rules. The workers are locomotive engineers, conductors, train and yard workers. According to the workers, the earlier agreement between their union, the Teamsters Canada Rail Conference (TCRC), and the company expired on December 31, 2021. The Company had refused to come to a new agreement with the workers union which would take into account workers demands. The TCRC held an electronic strike vote in February. The results of this strike ballot showed that 96.7% of the workers voted in favour of a strike, if their demands were not addressed. 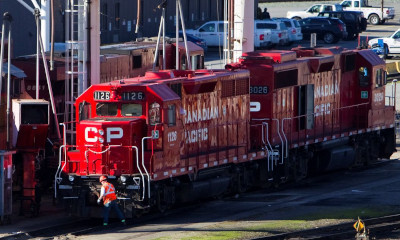 Railways in Canada are privately owned, and CP is the second biggest railway in Canada. Canada is the second biggest country in area after Russia. Railways play a major role in transporting commodities and finished goods to its ports, including coal, foodgrains, and cars. Canada is the world’s biggest producer of potash, a key ingredient for producing fertilizers, followed by Russia and Belarus. CP’s network runs across much of southern Canada and extends as far south as Kansas City in the United States.

Immediately following the strike vote by rail workers, the CP launched a huge propaganda campaign blaming rail workers for planning to cause “disruption” of the economy by going on strike.  The CP management, as well as various organisations of the bourgeoisie began calling upon the government to declare Railways an “essential service” and strikes by railway workers illegal.

On March 16, Canadian Pacific served the workers union a notice of lockout. On the midnight of March 19-20, lockout was implemented. After two days of shutdown of the railways, the Canadian government announced that the dispute between the CP and the workers would be settled by arbitration. That is, the management of the company and the union would present their demands before a so called “independent” arbitrator whose decision would be final.  Canada’s Minister of Labour Seamus O’Regan Jr, who mediated the talks, said normal operations will continue at CP during the arbitration period.

It can be seen that an entire system has been set up to sabotage and crush the just struggle of workers for their rights. If workers dare to strike, they are portrayed as disrupters of the national economy, and calls are given to criminalise their struggle. On the other hand, when the capitalists attack the workers rights, impose lockouts, this is considered just fine. The arbitration by an “independent arbitrator” is an old ruse of the bourgeoisie. Usually, the “independent arbitrator” is a representative of the government. The government itself represents the interests of the capitalist monopolies. In this situation, arbitration is but a means to impose unacceptable conditions on workers, while preventing them from going on strike for their demands.

One of the issues rail workers of the Canadian Pacific have raised is that the company must stick to the earlier pension scheme, according to which workers got defined benefits.

Workers are also demanding better working conditions. Between 2012 and 2016, CP Rail eliminated 4500 jobs  — 23 per cent of the company’s overall workforce — and increased the length and speed of its trains. This meant smaller crews on fewer trains running faster with heavier loads. Workers say this is an unsustainable dangerous situation.

CP Rail workers went on strike in 2015 and 2018 to address worker fatigue. However, their working conditions have not improved. Workers are forced to spend 50-70 hours away from their homes. The working conditions are resulting in exhaustion, injuries, mental illnesses and other serious problems.

Instead of the concerns of workers being addressed, the Canadian state is criminalizing the struggles of workers. The private monopolies are being given a free hand to maximize their profits by intensifying the exploitation of workers.