Tamil Nadu Trade Union Centre held a demonstration at Ambur on 7th of May, 2022. Hundreds of leather, shoe and related product manufacturing workers from companies in and around Ambur participated in this demonstration. On this occasion, the union also celebrated May Day. Comrade Dakshnamoorthy chaired and conducted the proceedings.

Comrade Ruban, the General Secretary of the Tamilnadu Trade Union Center, saluted the workers on the occasion of May Day. He elaborated on the struggle waged by the union to defend the rights of workers in various factories in and around Ambur. In particular, he dwelt on the protracted struggle waged by NMZ factory workers. After 15 years of struggle, these workers have won some of their demands. However, even though the court has ordered in favour of the workers, the management is refusing to pay the dues of the workers. Com Ruban condemned the attitude of the management and called upon it to immediately settle all the dues of the workers. 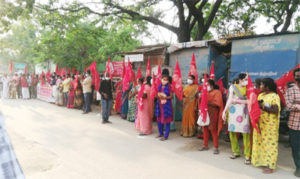 He also emphasized the need for raising the minimum wages of the workers to decent living wages of Rs 30,000 per month, which trade unions have been demanding for a long time. Due to the crisis, many companies in the field of leather and allied products have closed down their operations in the Ambur belt. Workers who have lost their jobs are going through very difficult times. The capitalists who close down the factories have not paid them even the legal termination benefits. Comrade Ruban demanded that all these industries should immediately arrange to pay the workers their termination dues.

Com Bhaskar conveyed revolutionary greetings to all the workers. In his brief address denounced the political and economic system which has denied the NMZ factory workers even simple benefits for over one generation. While workers live in terrible conditions, unable to feed their families, capitalists amass wealth with the support of the Indian state and its institutions. Even after the court has passed the judgement in favour of the workers and ordered the capitalist to pay their dues, the capitalist continues to brazenly deny workers their dues. He explained the excellent living conditions of workers and peasants in Soviet Union after they won political power through the October Revolution. It is time that we Indian workers unite to fight for establishing workers and peasants rule in India.

The Mayday demonstration held by Tamilnadu Trade Union Center ended in a very positive mood. Participants resolved to further strengthen militant unity of the workers and fight for an India without exploitation.