For the past few weeks in the national capital, the government has been carrying out a brutal campaign to destroy the houses and means of livelihood of the toiling people by sending bulldozers from place to place. The drive is being run in the name of “removing encroachments” and “urban development”. In fact, this is a merciless attack on the rights of the workers and toiling people of the city. 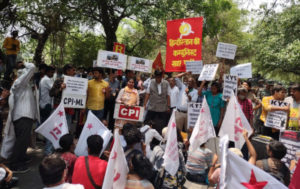 To raise their voice against this campaign, on May 11, 2022, communist parties and several mass organisations in Delhi staged a massive protest at the Lieutenant Governor’s house.

A large number of workers, youth, students, women and teachers participated in the protest. The victims of many of the demolished settlements also took part in the demonstration and expressed their resentment against the government.

The protesters held placards in their hands that read: ‘Stop uprooting people’s livelihood and houses in the name of encroachment!’, ‘Give a constitutional guarantee to the right to housing and employment!’, ‘Bulldozer’s policy will not work!’, ‘Unite against capitalist exploitation!’, etc.

Condemning the merciless attack on workers and toilers by the government, the speakers made it clear that this campaign being carried out in the name of removing “illegal settlements” and “encroachments” is a gross violation of our rights. The fact of the matter is that it is the ruling capitalist class and the leaders of its political parties who set up these slum colonies, where the workers are forced to live in inhuman conditions without drinking water, toilet facilities or sewage disposal. The ruling capitalist class and their political parties set up the slums so that the capitalists continue to get a constant source of cheap labor. The inhabitants of these settlements are forced to live at the mercy of the ruling class and its state machinery and political parties. Whenever the bourgeoisie wants, the government destroys the houses and properties of the people living in these slums and hands over their land to big real estate developers. At the same time, false propaganda is spread by the political parties of the capitalists that a particular community is being targeted, so that all the workers do not come together to protect all those whose houses are being demolished.

Many speakers clearly said that the conflict that is going on in India is not a conflict between people of different religions. It is a conflict between the exploiters and the exploited. In order to divert the toilers from the path of unitedly fighting against exploitation and oppression, the rulers do their best to spread hatred and incite people against each other, on the basis of religion.

The program concluded with spirited slogans of strengthening our unity and united struggle against the growing attacks on the workers by the bourgeoisie.