A large number of workers were killed and hundreds injured in a devastating fire at a factory near Mundka metro station in West Delhi on the afternoon of May 13, 2022. 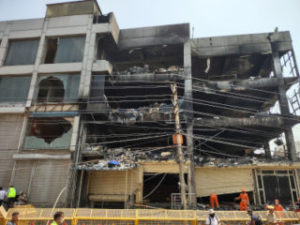 The company used to manufacture CCTV cameras and routers. A lot of inflammable material is used in the making of these devices.

From all the information received, it is clear that the company was being operated in open violation of the factory laws established by the government.

The company was operating inside a building built on the Lal Dora land, which is illegal according to government rules. It was being run without any NOC of the required authorities. The government has given permission to operate the factory on the basis of self-certification   by the company owner himself, that all necessary security arrangements were in place. There was only one narrow door-way out of the company, where the generator was also kept. There was no other way out. Fire safety rules were being openly flouted, placing the workers’ lives at great risk.

The exact number of dead and injured is yet to be estimated, as many people are missing. It is likely that their bodies have been burnt to ashes. According to news sources, most of the bodies are so badly burnt that it has become impossible to identify the dead.

According to eyewitnesses, many women were seen jumping down from the second and third floors to save their lives. The number of injured is also estimated to be in hundreds.

According to reports, about 300 women, most of them young women, were working on contract in 12 hours shifts in that factory. They were forced to work on a salary of Rs 6,000-6,500 per month (which is much less than the government’s minimum wage – about Rs 16,000). There were no records of workers employed there. The workers were not entitled to provident fund, ESI, etc. Most of the workers had come to Delhi from nearby villages of UP, Bihar, etc. in search of a livelihood. They were forced to work in these inhuman conditions, to sustain themselves and their families.

The fire at the factory in Mundka is not a chance incident. In Delhi and in many cities of the country, lakhs and lakhs of factories are operating, with the connivance of the capitalists and their state, in which crores of women and men are forced to work at great risk to their lives, to feed themselves and their families. These kinds of factory fires and factory accidents happen again and again, but the officials of the Government and the administration, without whose connivance such factories cannot run, get away scot-free every time. They are never held accountable, they are never punished.

Such incidents repeatedly expose the inhuman face of the present capitalist system. They are the result of the criminal irresponsibility of the state and the administration. Workers in our country and all over the world have been fighting for safe and healthy working conditions. But in the present capitalist system, because of the greed of the capitalist exploiters for more and more profits, the Indian state which serves the interests of the capitalists, and all the governments within this state, openly violate this fundamental right of the workers. All political parties of the capitalists connive in this.

The Indian state has eliminated all labour laws and instead, introduced four labour codes, in the interests of the big monopoly capitalists, both Indian and foreign. Workers will be deprived of all the rights for which they have fought hard for years. Abolition of contract labour, ensuring a living wage, security at the workplace, limited hours of work, the right to form unions and raise their voice for their rights — these are all important demands for which the workers have been struggling.

The hands of both the Delhi government and the central government are stained with the blood of the workers who died in the fire. The officers holding the highest positions of the government and administration will have to be held accountable for this. The demand of the trade unions that they should be prosecuted and punished is absolutely justified.

In place of this man-eating capitalist system, a system has to be established in which workers and their working conditions will not be viewed from the point of “reducing the cost of production.” The workers and peasants will have to take state power in their own hands, to steer the economy in a new direction, to fulfil the needs of the people and not the greed of the capitalists.