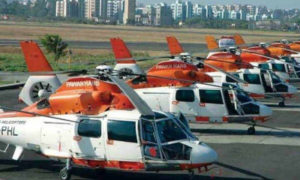 Two weeks later, on 16 May, the Central Government announced its decision to put on hold the sale of its share in Pawan Hans. The reason lies in objections raised by the Kolkata bench of the National Company Law Tribunal (NCLT) about the Cayman Island-based company named Almas Global.  According to NCLT, Almas Global, which was acquiring bankrupt Kolkata based EMC Ltd, had failed to pay the Rs 568 crore due to the creditors of EMC Ltd under an approved resolution plan.

The government has now announced that it “will do a legal examination of the NCLT order” before proceeding further in the Pawan Hans sale.

Pawan Hans is a national asset.  It was founded in 1985 as a joint venture of the Ministry of Civil Aviation and the Oil and Natural Gas Corporation (ONGC). It is the largest helicopter service provider in the country.

The fleet of 43 helicopters of Pawan Hans (of which 37 are reported currently operational) serves many vital social needs. It is used in the offshore operations of oil and gas companies. It serves as a vital means of transportation for people between islands in the Andaman & Nicobar Islands and Lakshadweep. It connects many remote and inaccessible parts of Arunachal Pradesh and other states in the north-east of India, Jammu & Kashmir, Uttarakhand and Himachal Pradesh. It serves tourists as well as government personnel.

Pawan Hans also provides its helicopters for search and rescue operations during natural calamities, carries personnel and material for the Border Security Force and the Border Roads Organisation, supports the Power Grid Corporation and helps in the surveillance of pipelines of not just ONGC, but GAIL and Oil India Limited as well. Pawan Hans helicopters are regularly deployed by the security forces and chartered for a variety of purposes by government agencies.

Earlier, on May 14, the All India Civil Aviation Employees Union had appealed to the Delhi High Court to stop the proposed strategic sale of the entire government equity shareholding of 51 per cent in PHL.

In its submission to the High Court, the employees’ union has emphatically pointed out that PHL has been consistently fulfilling the role of an essential service and must therefore not be privatised.

The costs of the helicopter services that the state owned Pawan Hans currently provides for people in Andaman & Nicobar Islands and some other regions are heavily subsidised. Privatisation of Pawan Hans will at one stroke put these services out of reach of the vast majority of people.

Pawan Hans Limited was regularly earning profits till 2017-18. PHL has consistently earned revenue for the state and provided vital service to the country. PHL has paid a dividend of Rs 245.51 crores to the Ministry of Civil Aviation, Government of India and ONGC to date, besides having a positive net worth of Rs 984 crores.

In January 2017, the government announced its plans to privatise Pawan Hans Limited.  Since then, the Civil Aviation Ministry and PHL management has been pursuing the path of wrecking PHL, turning it into a loss making enterprise, in order to justify selling it at the lowest possible price to some private party.

The employees have declared that there is no justification for the sale of PHL. They have opposed the sale of this vital public sector service to a company which has no assets or capability in providing the kind of service that PHL has been providing.

The privatisation program of the ruling class is aimed at subordinating all spheres of social production to the drive of monopoly capitalists to reap maximum profits. The privatisation of PHL has the same aim as privatisation of Indian Railways, Coal India, state electricity boards, petroleum and other heavy industries, public sector banks and insurance companies, ordnance factories, and other public services.  It is aimed at fulfilling capitalist greed at the expense of social need. It is totally against the interests of the workers as well as against the national and social interest.