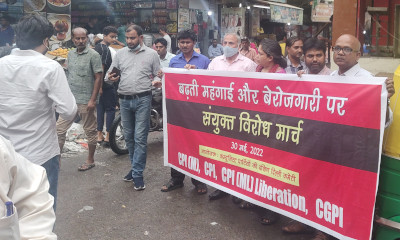 Uniting under the banner of Joint Protest against Rising Prices and Unemployment, the protestors raised militant slogans like: Falling Incomes and Rising Prices, Halt the Price Rise! Take Back the Anti-poor Policies! Halt Unemployment! Provide jobs for all! Prices of Food Articles, Cooking Gas, Petrol and CNG are Skyrocketing and Making Lives of Masses Miserable! Stop the Politics of Dividing People! These slogans were written on the banner and placards held by the protestors.

Large contingent of police was posted at the protest location. Even as the protest began, the police were ordered to stop the protest and they arrested the leading activists of the participating political parties. They were locked up in the police station for several hours thereafter. 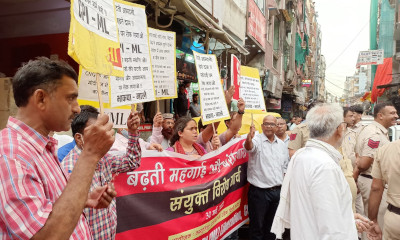 The Communist Ghadar Party of India condemns this attack on the right of people to protest. As people’s united opposition gets stronger in the face of the bourgeoisie’s and its governments’ increasing all-sided attacks, the bourgeoisie is trying to terrorise us into submission by useing every kind of divisive politics and suppression.

We must steadfastly intensify our united struggle and give a fitting reply to this oppressive state while strengthening our unity.