Mazdoor Ekta Committee organized a militant demonstration on May 22, 2022 in Okhla Industrial Area, South Delhi, to protest against the death of workers in the Mundka factory fire. Many youth and women workers participated in this demonstration. 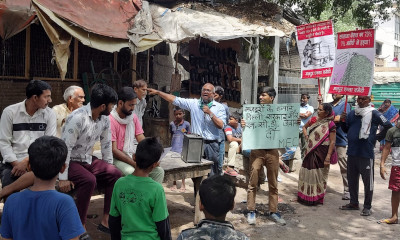 The workers and young activists held banners and placards in their hands, which had slogans expressing their demands and their anger. Some of the slogans were – ‘Delhi government and MCD are responsible for death of workers and must made to account!’, ‘The nexus of capitalist owners and government agencies is responsible for the death of workers!’, ‘Who is responsible for industrial accidents – Delhi government should answer!’ ‘Are workers’ lives cheap, and safety equipment expensive?’, ‘Government agencies are responsible for increasing accidents in industrial areas!’ etc. Through several posters and satirical pictures, the protesters depicted the exploitation of the workers by the capitalists.

The streets of the residential areas of the Okhla industrial area reverberated with the slogans of the angry workers. Hundreds of workers came out of their homes, expressing their support with the workers of Mazdoor Ekta Committee.

In many places, the protesters held street corner meetings and spoke to the people. 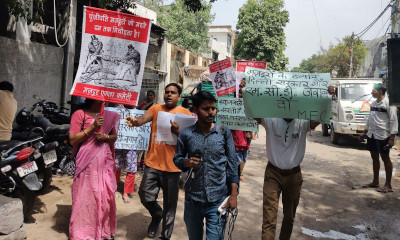 The speakers explained that in Delhi and many other cities of the country, with the connivance of the administration and the capitalists, hundreds of thousands such factories are run, in which crores of women and men are forced to work without any kind of security to earn their livelihood. They are made to work putting their lives at risk. Incidents like these repeatedly bring to the fore the barbaric, inhuman face of the existing capitalist system.

The hands of both the Delhi government and the central government are stained with the blood of the workers who died in the fire. The officers in the highest positions of the government and administration will have to be held accountable for this. Mazdoor Ekta Committee demands that they should be tried and punished.

In place of this man-eating capitalist system, we must fight to establish a system in which workers and their working conditions will not be viewed from the angle of “reducing the cost of production”, but meeting the needs of all workers and ensuring their security will be the first and foremost concern of the state.