On June 2, 2022, a massive protest was organized at the residence of the Chief Minister of Delhi, led by the Joint Forum of Trade Unions of Delhi.

Demonstrators expressed their anger through their indignant slogans – ‘Who is responsible for industrial accidents – Delhi government should answer!’ ‘Are workers’ lives cheap, and safety equipment expensive?’ ‘Government agencies are responsible for increasing accidents in industrial areas!’, ‘Stop playing with the lives of the workers!’, ‘Give proper compensation to the victims’ families!’, ‘The Delhi government and MCD, the killers of the workers, give us an answer!’, ‘The nexus of the capitalist owners and government agencies are responsible for the workers’ death!’, etc. Worker held placards and banners with these and other slogans. 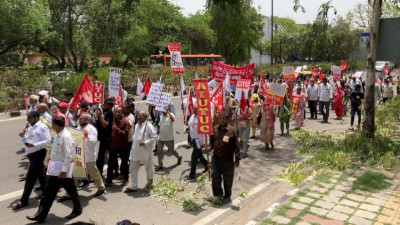 Representatives of protesting organizations addressed the protesters. The speakers demanded compensation for the families of the dead workers and the harshest punishment for the state officials. Holding the Delhi government, the central government and the entire state administration responsible for the death of workers in the Mundka fire, the protesting workers demanded from the government that necessary steps should be taken so that such fires and industrial accidents never happen again and workers should be secure at their workplaces.

A memorandum along with these demands was submitted to the Chief Minister on behalf of the trade unions.