The island nation of Sri Lanka, India’s southern neighbour, is going through its worst ever all-round crisis.  Food, fuel, medicines and other essential articles have been in acute short supply in recent months. Sri Lanka depends on imports to fulfil many essential mass consumption goods. Shortage of foreign currency to buy them from abroad has led to millions of people being deprived of basic needs.  Decline in oil imports has led to severe shortage of fuel, which in turn has led to crippling power cuts.

Massive numbers of people are camping out on the streets in protest.  President Gotabaya Rajapaksa declared a state of emergency on 1st April.  It met with such widespread and angry protests that he was forced to withdraw it. Since then, Prime Minister Mahinda Rajapaksa has been forced to resign. The President has appointed Ranil Wikremesinghe, a former Prime Minister, in his place.

What are the domestic and international factors responsible for this all-round crisis in Sri Lanka?  Maximum confusion is being spread on this question. 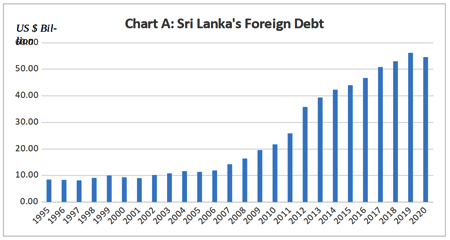 The foreign debt of Sri Lanka reached a peak of US$ 56 billion at the end of 2019.  The western imperialist media and all kinds of so-called experts have been trying to put the blame for this on China, and on the Rajapaksa regime for relying on China for financial assistance. The United States of America is accusing China of “debt-trap diplomacy”. 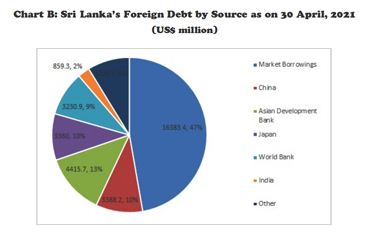 The fact is that China accounts for only 10% of Sri Lanka’s foreign debt. The largest portion of foreign debt is classified as “market borrowing”, which is owed to the big American and European monopoly banks. The World Bank and Asian Development account for about 10 percent each (Chart B).   In other words, the financial institutions dominated by American, European and Japanese capitalists together account for 80 percent.  There is no basis to accuse China for Sri Lanka’s debt problem.

The International Monetary Fund (IMF) has advanced as many as 16 loans to Sri Lanka so far, which have all been repaid.  Each IMF loan came with conditions such as cutting back government subsidies including food subsidy, reduction in social expenditures and depreciating the national currency in order to make Sri Lankan exports competitive.

The IMF and other institutions of imperialist finance capital are responsible for pushing Sri Lanka on a dangerous course of economic development called export-led growth. The debt burden is one of the disastrous results of following that course.

Export-led growth, or export-oriented growth, has been promoted by the World Bank, IMF and other agencies of neo-colonial plunder of former colonial countries.  Especially since the 1980s, it has been promoted as the best course of development for the countries of Asia, Africa and Latin America. What it means is to orient production towards the world market.  It means that Sri Lanka should invest in producing more and more of such goods that can be exported at a profitable price.

The theoreticians of the “free market”, the advocates of liberalisation, privatisation and export-oriented growth claimed that rapid growth of exports will generate new employment. It will generate additional incomes that will trickle down to benefit all.

The promoters of this theory argued against the need for a country to produce as much of its own needs as possible. They claimed that as far as the needs of the people are concerned, if there is not enough production in the country, they can be imported.  As long as exports and tourism keep growing at a rapid rate, and as long as Sri Lanka can access loans from foreign banks, there will be enough foreign currency to keep importing whatever is needed.

In sum, Sri Lanka has been pursuing a course of development based on the principle of relying on foreign markets, foreign tourists, foreign trade and foreign capital.  It is the opposite of the principle of self-reliance.  The fact that Sri Lanka had to approach the IMF as many as 16 times shows the high risk involved in this course of development.

IMF is one of the premier agencies of international finance capital, backed by the leading imperialist powers headed by the USA.  The majority of capitalist states in the world are its members.  It has the formal role of acting like a central bank, a lender of last resort, for any member state which is facing a foreign currency shortage.

When the US imperialists decide to target a particular country for economic distress and political destabilisation, various institutions of finance capital are set into motion.  The credit rating agencies downgrade that country and the banking monopolies hike the rate of interest on their loans. Working together, private profit seeking institutions and imperialist states get the government of the targeted country into a debt trap and foreign currency crisis.  Then that government is advised to approach the IMF to bail it out. The IMF exploits the situation to push the imperialist prescriptions of liberalisation and privatisation.  They have pushed Sri Lanka along the path of export-led growth. 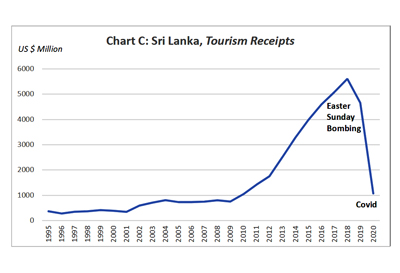 As for the more immediate factor, or the event that became the turning point in Sri Lanka’s fortunes, we have to examine the cause for the drastic decline in foreign currency receipts, which began in 2019. It began well before the Corona Virus broke out. The trend in the receipts from tourism clearly shows that the turning point was the Easter Sunday bombings of April 2019 (Chart C).

The Easter Sunday bombings crippled Sri Lanka’s world-famous tourism industry.  It also affected many commodity exports. Foreign buyers stopped placing orders on Sri Lankan suppliers due to the uncertainty created by the terrorist attack.  The downturn in tourism and export receipts, from April 2019 onwards, snowballed into a balance of payments crisis. Covid further aggravated the problems from 2020 onwards.

On 21 April 2019, Easter Sunday, three churches in Sri Lanka and three luxury hotels in the commercial capital, Colombo, were targeted in a series of coordinated suicide bombings. Later that day, there were smaller explosions at a housing complex and a guest house. According to Wikipedia, a total of 269 people were killed, including at least 45 foreign nationals, three police officers and eight bombers. At least 500 persons were injured.

The western imperialist propaganda as well as Sri Lankan government propaganda has blamed the “Islamic State in Iraq and the Sevant” (ISIS) for the bombings.  On 23rd April, just two days after the attack, Defence Minister Wijewardene stated in parliament that the government thinks that this attack was in retaliation to the shootings in mosques in Christchurch, New Zealand. The government of New Zealand has contested this theory.

There is no history of Muslim-Christian conflict in Sri Lanka. The Easter terrorist attack was not accompanied or followed by the spread of anti-Christian propaganda.

The Senior officer in charge of the Criminal Investigation Department (CID) of Sri Lanka stated in July 2019, while testifying before a special Parliamentary Select Committee, that there is no evidence to claim that the Islamic State (IS) was behind the bombings. He is reported to have said that the terror group which was behind the attacks had requested the Leader of the IS, through a third-party in Indonesia, to release a statement on the matter. His statements indicate that the real mastermind’s identity remains hidden, while IS has been made the scapegoat.

A sober analysis points to a plot carried out for geo-political reasons.

Which is the power which would perceive a political gain in wrecking Sri Lankan tourism and destabilising the present regime?  The needle of suspicion points to the United States of America.

US imperialism has been warning the ruling class of Sri Lanka against developing close relations with China.  Despite these warnings, the Rajapaksa regime turned to China for assistance in 2021. This was not welcomed by the US imperialists. It is to be noted that the Biden administration pointedly excluded Sri Lanka from the list of invitees for the Democracy Summit held in December 2021. India and Pakistan were invited but not Sri Lanka.

It is possible that the terrorist attack was organised to bring Sri Lanka to its knees, back to the IMF with a begging bowl, and to create the conditions for a regime change that would suit American imperialist interests. Earlier, the country had gone through decades-long civil strife and brutal state repression of the Tamil people. This had weakened the unity of the people and made Sri Lanka even more vulnerable to foreign imperialist interventions.

The people of Sri Lanka are the victims of an imperialist prescribed course of economic development.  It is a course that has pushed the country into ever increasing economic and financial dependence on foreign markets, foreign tourists and foreign capital. They are also the victims of a diabolical imperialist plot, most likely masterminded by the US, to wreck the economy, destabilise the political establishment and bring about a regime change that strengthens the positions of US imperialism in Sri Lanka.