Tens of thousands of workers participated in a massive rally near the U.S. Capitol in Washington, DC on June 18. Working people from almost all the states in the US came together in the rally, united in their demand to end poverty, racist discrimination and denial of basic rights. The rally included warehouse and municipal workers and their unions, health care workers, women, senior citizens as well as undocumented workers from many sectors of the economy. 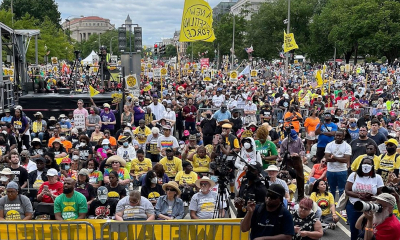 The rally was marked by the militant spirit and determination of the participants. Banners at the rally, bearing the slogan ‘Everybody’s got a right to live!’ gave expression to the prevailing sentiment that housing, health care, education, decent wages and safe working conditions are basic human rights. By demanding these, people are making their claims on society for what belongs to them by right.

Addressing the rally, many speakers denounced the fact that in the United States nearly 140 million people live in poverty. They demanded that the government take immediate action to alleviate their miseries.

Many participants angrily pointed out that Constitution of the United States and those of the individual states defend racism and inequality. The governments at every level uphold a system in which working people are forced to live in poverty. Thousands of people have no jobs while many others have to work at more than one job. The majority of those forced to live in poverty are the immigrants and the black, brown and native American people. Many of the protestors spoke up against the attacks on their dignity and livelihood. “It is not enough to be resilient and survive, it is our human right to grow and thrive,” said one of the protestors.

They exposed the lying propaganda of the government, which is using the pretext of scarcity of money to justify the attacks on their livelihood and rights. They pointed out that the US government has no shortage of money to hand out to corporates. On the other hand, it claims to have no money to fund a universal health care system. People highlighted the criminal callousness of the government towards the poor during the Covid-19 crisis.

Workers from several of the states in the southern part of the US – North Carolina, South Carolina, Georgia and Alabama – raised their voice against laws in those states which ban the formation of workers’ unions and thus keep wages low. They demanded the federal minimum wage – currently at $7.25 since 2009 – to be raised to at least $15 an hour. Even that is barely above the poverty line.

Workers of Amazon and Starbucks joined in the protest in large numbers. They have begun to form their own unions across the US and are waging a militant battle for the re-instatement of those workers who were dismissed for trying to organise themselves into a union. Workers at Amazon have asked for a minimum wage of $35 an hour.

The protestors expressed their anger against the monopoly corporate houses, who have amassed immense amount of wealth, while the working people are increasingly driven to hunger and homelessness. They highlighted the fact that just a fraction of the US government’s trillion dollar military budget could significantly reduce the poverty and miseries of the masses of people.

By coming together in such large numbers and giving a collective expression to their demands, the workers and working people clearly stated that they will not be silenced. They expressed their determination to continue the struggle for their rights.