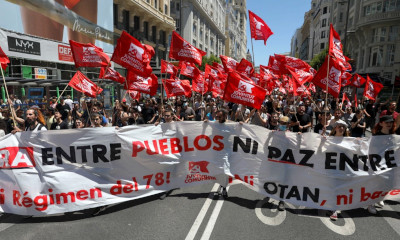 Thousands of people participated in actions to protest against the NATO summit held in Madrid, Spain between June 28-30. The protest actions took place in defiance of the ban on them. Over 10,000 police were mobilized, turning Madrid into an armed camp, to protect the NATO leaders from the people’s condemnation of their war preparations.

Counter Summit events were held in Madrid itself on 24th-25th June on the theme ‘No NATO! Bases Out!’ The Counter Summit ended with an estimated 5,000 people marching through the streets of Madrid on 26th June calling for the elimination of NATO bases in Europe and the abolition of NATO. The Declaration of the Peace Summit held NATO ‘illegitimate’ and demanded that it must be disbanded.

In Germany, hundreds of protesters joined in a week long encampment from 19th-26th June near the Ramstein base, the largest American air base outside the U.S. It is a base of military occupation and a seat for NATO activity. The week of activities at the Ramstein base concluded with about 500 people blocking an entrance to the base and demanding the closure of Ramstein and removal of all U.S. bases from Germany. 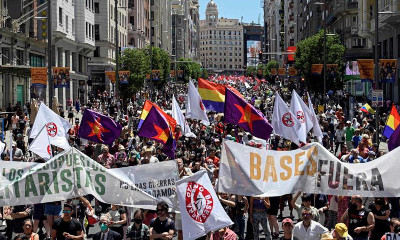 In cities across Canada rallies, protest meetings and virtual meetings were held to condemn the NATO Strategic Concept 2022 summit, to condemn the war-mongering and war preparations and demand that NATO be disbanded.

People in Europe and North America are increasingly coming to the realisation that it is the US-led NATO alliance that is the biggest threat to world peace. NATO-led military interventions have devastated dozens of countries. NATO is a factor for war.  It drives the global arms race and is responsible for more than half of global military spending and two-thirds of the global arms trade. As long as NATO exists, the threat of peoples and countries being hurled into a new war is very real. The demand for the dismantling of this aggressive military alliance is absolutely just.