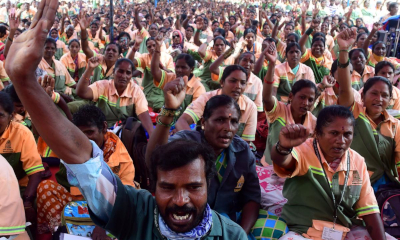 The Karnataka Safaikaramachari Kaval Samithi, the BBMP Powrakarmikara Sangha, Karnataka Pragatipara Powrakarmikara Sangha and other unions of sanitation workers across Karnataka jointly led this indefinite strike. On July 4, the Karnataka Chief Minister announced that his government would recruit those sanitation workers who are presently on contract, as regular employees of the government. The strike was called off after this assurance by the Chief Minister. 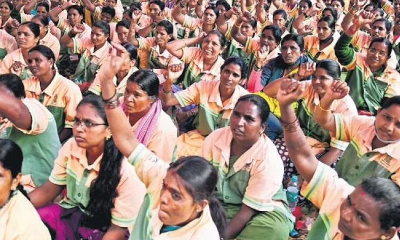 Sanitation workers are forced to work in inhuman conditions. They are not provided basic facilities like gloves, drinking water, and access to toilets. The contract workers are paid 14,000 Rs a month or less, which does not take care of their day to day needs. Every month, between Rs.1000 – Rs.2000 is deducted from their salaries on some pretext or other. On the other hand, the regular workers employed for sanitation duty get paid between Rs 33,000 – Rs 40,000.

The sanitation workers have been protesting for several years now. In March 2017, the previous Karnataka government regularised a section of the sanitation workers.  However, the majority of workers continued to be on contract. Their struggle for regularisation of their jobs and for social security is a just struggle.