Under the flag of ‘NREGA Sangharsh Morcha’, MGNREGA (Mahatma Gandhi National Rural Employment Guarantee Act) workers from all across the country, staged a three-day dharna 2nd-4th August at Jantar Mantar in New Delhi in support of their demands. NREGA Sangharsh Morcha is a united front of organizations working among MNREGA workers across the country. 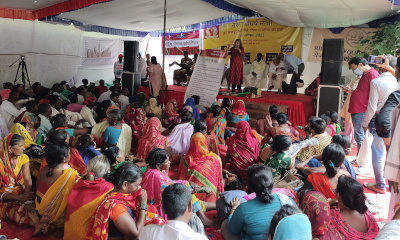 NREGA Sangharsh Morcha says that only Rs 73,000 crore has been allocated by the government for MNREGA in the financial year 2022-23. Out of this, about Rs 18250 crore is towards meeting the liabilities of the previous years. This cut in spending comes at a time when the number of households seeking work in May 2022 was 11 per cent higher than in the same period last year and also much higher than the year before the Covid pandemic hit. As of 1st July 2022, the government owes funds to 15 states towards payment of MNREGA arrears; West Bengal has not received any funds since January. Therefore, the dharna demanded that the government to immediately increase this amount and ensure its allocation to respective states as soon as possible.

Workers from many places pointed out that as per the MGNREGA Act, the workers should be paid within 15 days of the completion of the work. And each day’s delay in paying the wages of the workers should be fully compensated. But this is not followed. The legal provisions of NREGA are being ruthlessly violated. Instead of expanding NREGA, the government is reducing allocation of funds for the scheme. There is also a delay of several months in the payment of wages to the MNREGA workers. 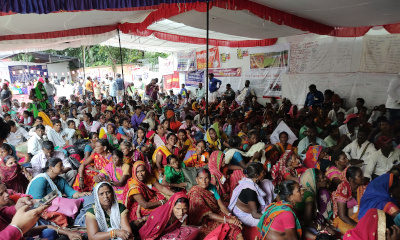 All the workers vigorously raised the demand for a minimum of 200 days’ work in a year and a payment of Rs 800 for a day’s wage.

The workers also vehemently raised the important issue that the problems of the workers have increased manifold due to the use of National Mobile Monitoring Software (NMMS) app, designed to ensure planned monitoring of MGNREGA workers and to record the actual time of attendance of workers at the workplace. Due to the lack of access to WIFI network and technical glitches, their attendance is not recorded. In such a situation, the payment of their due wages is not guaranteed. An important demand was raised during the dharna that NMMS Software based attendance recording system should be abolished immediately.

The agitating workers also spoke on the issue of corruption at different levels within the MNREGA system. Corruption is on the rise in many states due to nexus between private contractors, political parties and corrupt officials. A demand was raised to take strict action against it.

The workers of NREGA Sangharsh Morcha handed over the statement of all their demands to all the concerned government offices as well as the offices of MPs and offices of the political parties.