Protests actions have been taking place all over the country since August 15, when 11 people, convicted for the gang-rape of Bilkis Bano and murder of her family members in 2002, were released. Expressing their outrage, women and men from all walks of life have been participating in different kinds of protest actions. 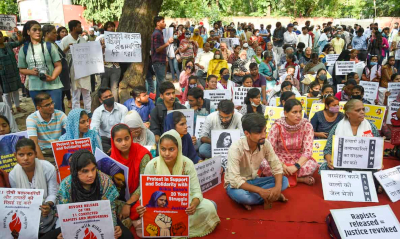 At Jantar Mantar in New Delhi, hundreds of activists of women’s organisations, human rights organisations, organisations of students and youth, artists, writers and cultural workers, as well as a large number of concerned citizens gathered to denounce the government and demand that the decision to release the convicts should be reversed. A large banner on the stage read: “Stand in support and solidarity with Bilkis Bano’s struggle for justice”.

The protestors carried placards and banners, with slogans such as: “Unite against state organised communal violence and massacre!”, “Fighters for people’s rights remain locked up in jail while rapists and murderers are set free – real face of Rule of Law!”, “Release of rapists is a precursor to reign of terror against women!”, “Rape is a grave crime, remission of rapists is a heinous crime!”, “Revoke the remission of the culprits!”, “We want justice!”, “An attack on one is an attack on all!”. They raised slogans denouncing the decision to release the convicts and demanding an end to state organised communal violence as well as rape and all crimes against women. 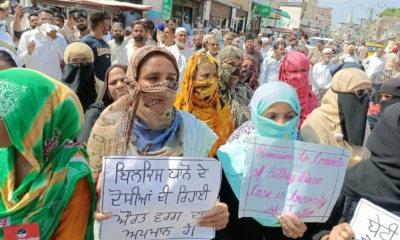 Speakers from the participating organisations addressed the rally. They condemned the release of the convicts. They questioned the courts and judiciary, for this decision. They denounced the central and Gujarat state governments. The message it sends to the women and people of this country is that they can never hope for justice, speakers said. They demanded that the remission of the sentences of the convicts should be revoked.

Protest actions were held in several states — Telangana, Andhra Pradesh, Karnataka, Punjab, Kerala, Tamil Nadu, Rajasthan, Maharastra, etc. Thousands of people came out on to the streets, against the unjust decision. The protestors questioned Prime Minister Narendra Modi’s silence on the issue and demanded that the decision should be immediately reversed.

Even though the protests were in different languages, they resonated with a common purpose — Justice for Bilkis Bano, end to state organised communal genocide, punishment for rape and crimes against women.

Hundreds gathered in Freedom Park in Bengaluru, demanding a reversal of the remission of the 11 convicts by the Gujarat government on August 15.

Apart from Bengaluru, protests were witnessed in 15 districts of Karnataka, such as Gulbarga, Yadgiri Hassan, Chamrajnagar, Chickmaglur, Bellari, Bidar, Bijapur and many others.

Protests were organised in Hyderabad, Telangana and in Vishakhapatnam, Andhra Pradesh. In Mumbai, Thane, Pune, Nagpur, Aurangabad and many other parts of Maharashtra, working women and young women of schools and colleges came out in large numbers to denounce the government and demand justice for Bilkis Bano. Theatre activists and cultural activists also vigorously participated in these protests.

In Chandigarh and other towns in Punjab, people came out to protest. Varanasi and other towns of UP also saw large protests. Women, men and youth vigorously protested in different parts of Kerala and Tamilnadu, demanding punishment of the guilty and justice for Bilkis Bano.

Some photos of protest actions in different parts of the country