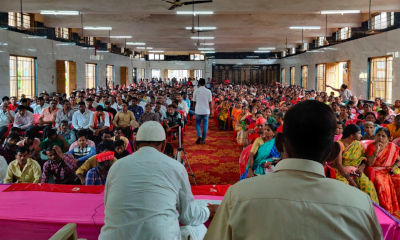 “Kamgar Sangharsh Sabha” was organised in Bhiwandi on 12 September, 2022  under the  banner of Lalbavta Power Loom Warper and Unorganised Kamgar Sanghatana. The meeting was organised to celebrate the victory of the workers, who had won a monthly wage rise of Rs. 2000 after a united and resolute struggle.

Speakers were Comrade Vinod Nikole, MLA from Dahanu, Maharashtra and the State Secretary of CITU and Comrade Narsayya Adam Master, ex-MLA, Solapur and workers’ leader. A representative of Lok Raj Sangathan (LRS) was also invited to address the meeting.

Com Sunil Chavan, the leader of the loom workers as well as the beedi workers, hailed the unity and support of the workers and explained the context of the meeting. When loom workers were sitting in dharna in Bhiwandi to put forward their demand for proper wages and amenities, the loom owners’ goons entered their union office and attacked them. However, the workers united to drive the goons away and the owners had no choice but to negotiate.

The 1000 women, men and youth who had thronged the hall agreed with Comrade Sunil and raised militant slogans of “Ladenge Jeetenge!”, “Inquilab Zindabad!”, “Hamara Hakk Ladke Lenge!” and “Malik ki dadagiri nahi Chalegi!”. The workers had gathered in large numbers despite the rain and despite facing loss of pay as it was a working day.

Comrade Narsayya Adam Master hailed the 400 workers who fought the goons. We will always win if we are united. We are not begging; we give our sweat. All that is produced is because of the labour of toilers. We are fighting in many areas, in Malegaon, Nashik, Solapur, etc.

Ms. Trupti, the representative of Lok Raj Sangathan hailed the presence of a large number of women, youth and workers and said even after 75 years of Azadi we still have to come on the streets to demand minimum wages, quality education, health and basic amenities. Is this the Azadi our ancestors fought for ? This is not the society we want. Today the prices of all things are rising sky high. The government is not accountable to people. It is selling out our assets to the super rich. There is no program for the toilers of India. She expressed LRS’s support to the workers in their struggle for their rights.

Comrade Nikole said that they try to divide us as Hindu and Muslims. He declared his support for their struggle and said that he would speak about this to the Bhiwandi MLA and raise it in the Assembly as to how attack on trade unions, their leaders and workers are happening.