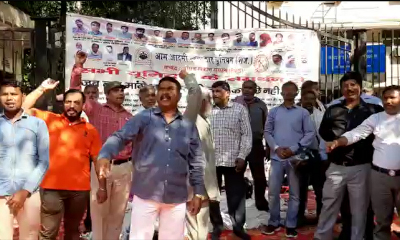 While on strike, the sanitation workers brought sweeping and garbage collection, along with other crucial sanitation work, to a standstill. The MCD officials were compelled to call the representatives of the unions to discuss the demands of the workers within two days of the strike. After assurances from the authorities of fulfilling some of their demands, the workers immediately called off the strike. They have decided that they will continue their struggle till all their demands are met.

Those working on daily wages are not given social security or health care facilities by the Corporation. These workers are hired by the corporation at a very low salary, only Rs.16,080 per month. They do not get any kind of compensation in case of an accident. In cases of death, no member of their family gets a compassionate job, pension, or any other compensation.

The struggling sanitation workers have raised the demands of regularization of the jobs of daily wage labourers and providing them with all facilities and immediate payment of their bonus, among other demands. They have also demanded that immediate action be taken with regard to old grievances of the workers and that permanent jobs and dividends should be provided to the dependents of deceased workers.

The sanitation workers of the Corporation have been fighting for a long time demanding protection and improvement in their deteriorating working conditions. They have been repeatedly assured by the Corporation officials that these issues will be addressed, but their demands have not yet acted upon.

The sanitation workers have declared indefinite hunger strike starting from 26th October if the assurances given by the Corporation officials remain unfulfilled.