Mass protests have yet again erupted in several European countries. Masses of people are out on the streets carrying banners and shouting slogans against inflation, against sanctions on Russia, against NATO. There is a growing demand from the people of these countries that their governments  get out of NATO. 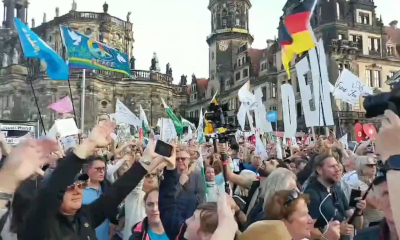 Tens of thousands of people participated in marches in the cities of France, Belgium, Moldova, the Czech Republic, Hungary, and Germany demanding an end to the sanctions on Russia that have resulted in economic distress for many households and businesses. Workers are demanding pay rises to offset inflation, government intervention in the energy market to bring down the prices of fuel, and an end to sanctions against Russia. Sanctions imposed by European countries against Russia have resulted in soaring energy bills.

This is the second wave, within a month, of mass protests sweeping across Europe. Tens of thousands of people came out on European city streets in early September. to protest soaring electricity bills and the worst inflation in decades.

There has been increasing awareness and growing opposition among the working class and people of the countries of Europe to the war mongering course being pursued by their governments in the name of defending Ukraine. They are seeing that their governments are sacrificing the peoples interests and working for the interests of the US and NATO. People are opposing the supply of weapons to Ukraine by their governments. There is growing demand for an end to the war so that economic turmoil can abate.

On 22nd October, there was a massive protest against NATO and the EU on the streets of Paris, France. Striking teachers, railway and health workers staged marches in dozens of cities, including Paris, snarling traffic and disrupting public transport. They demanded higher wages to meet the rising prices of essentials. Nurses and other public-sector workers struggling with inflation are asking why the government cannot afford to raise their pay when it can send hundreds of millions of euros in military equipment to Ukraine. Unions are calling for new nationwide protests on Nov. 10.

On 28thOctober, Czech people took to the streets to protest and demanded withdrawal from the European Union and NATO. Protestors raised the slogan “Russia is not our enemy, the belligerent Czech government is!”.

On 29th October,mass protests erupted in Moldova calling for the removal of the sanctions against Russia. They condemned their government for its pro-European Union pro-NATO and pro US stand, and called for its removal. . On the same day, there was a mass protest in Prague, for peace. Thousands of protesters in Prague called for talks with Russia to address the energy crisis ahead of the winter.They declared that they will not agree to be frozen in winter, for the sake of fulfilling NATO’s interests.

The same day also saw a massive protest action called Peace and Freedom Demonstration in Hamburg. People were opposing the German government’s pro war and anti people policies, the unbearable rise in  cost of living  and against NATO. Germany has seen weekly protest rallies since the end of the summer.

The US imperialist dominated international media has completely blacked out these mass protests of the peoples of Europe against the unbearable increase in the cost of living as a result of rising energy prices, against NATO and the warmongering course of their governments.