Since November 16, thousands of kisans have been on indefinite protest over non-fulfilment of their pending demands. The agitating kisans blocked highways in six districts, including Mansa, Bathinda, Patiala, Faridkot, Mukerian and Amritsar. They held protest demonstrations at the offices of the district authorities. 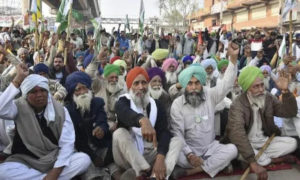 The agitating kisans expressed their anger against the AAP government in the state, which had come to power making big promises to the kisans, but had failed the kisans on all counts. They have accused it of only serving the interests of the big corporate houses. Kisans are demanding compensation for the families of those who died during the kisan andolan. They are demanding compensation for the crops destroyed by untimely rain and for cattle deaths due to disease. Kisans are also demanding that cases registered against their brethren and punitive entries in their revenue records for burning paddy stubble must be revoked. The government must provide them assistance for stubble management, they have said. They have denounced the Punjab government for condemning the kisan protests. 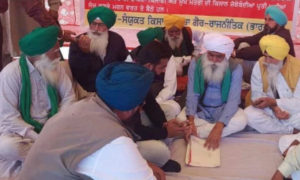 The president of the Bhartiya Kisan Union (Ekta-Sidhupur), Jagjit Singh Dallewal has launched a fast-unto-death at Tehna in Faridkot, in support of these demands. At a meeting in Mohali on November 18, several other constituents of the SKM, including BKU (Lakhowal), Krantikari Kisan Union and BKU (Ekta-Ugrahan), decided to join the ongoing kisan struggle, in support of their common demands.

Meanwhile, kisans in Uttar Pradesh are organising a ‘mahapanchayat’ in Lucknow on November 26. They have supported the struggle of the kisans of Punjab.