Peasants of Tamil Nadu continue to agitate in various districts. They are demanding guaranteed minimum support price for all their produce, adequate supply of urea and other fertilizers at affordable prices, withdrawal of the Electricity Amendment Act, proper compensation for the crops lost in floods, crop insurance and an end to the forcible acquisition of agricultural land for non-agricultural purposes.

Below we present some of the peasants’ struggles that took place in Tamilnadu in the past few months.

Struggles against shortage in supply of fertilizers and other agricultural inputs

Tamil Nadu Peasants’ Association Tuticorin District Committee and Tiruchendur Regional Committee held agitations in September – October in support of their demands, in Kurumbur, Arumuganeri and other places of the district.  Com V.Krishnamurthi and other peasant leaders led these agitations. The agitating peasants raised slogans demanding withdrawal of the Electricity Amendment Act, supply of all agricultural inputs including fertilizer through co-operatives without any shortages, fair wages to salt pan workers, desilting of drains and canals, protection of water bodies, provision of clean drinking water to residential areas, good quality healthcare facitilies in the village hospitals, etc.

There is severe shortage of fertilizers all over Tamilnadu. Peasants of Thoothukudi district have submitted a joint memorandum to the district collector asking to address this issue in the monthly Grievance Redressal meeting of peasants organized by Thoothukudi district collectorate. Com Saravanamuthuvel, Thoothukudi district President of Tamizaga Vivasayeegal Sangam, explained the hardships peasants are facing due to the acute shortage of urea and DAP fertilizers at this crucial sowing time and demanded immediate resolution of the shortage. Through the agitation the peasants have succeeded in getting the assurance from the district administration that the fertilizer shortages issue will be addressed.

In Kayathar of Toothukudi District, Tamil Vivasayegal Sangam staged a protest on September 19, with demands for crop insurance, urea, other fertilizers and removal of silt and sand from lakes and canals, etc.

A demonstration was held at the Coimbatore District Collector’s office in September by the Tamil Nadu Vivasayegal Sangam. The protestors demanded that theTamil Nadu government should immediately start work on the long pending Anaimalai Nallaru project . They raised the demands of the peasants along the Parambikulam Azhiyar Project (PAP) irrigation area, such as the demand that the electricity connection to the wells of the peasants should not be disconnected; the peasants who gave land for the Parambikulam irrigation project should not be discriminated against; rainwater should not be wasted during the monsoons and should be used to fill the lakes, ponds, tanks and other water bodies, etc. The protesting peasants submitted these demands to the District Collector. More than a thousand peasants, including PAP irrigation area peasants, activists of the Coimbatore and Tirupur Peasants’ Protection Association and peasants’ unions from Kongu Mandalam West Region   participated in this demonstration.

In Theni district, the public works department has banned the use of bore wells in the lands near the Mullai Periyar river in Chinnamanur area and the use of underground pipes for irrigation of dry lands such as Appipatti, Odapatti and Tenpalani. Thousands of peasants took out a procession on November 2, 2022 and submitted a petition to the district collector, to ensure adequate and regular water supply to the peasants of the area. Police prevented the farmer’s procession to Collectorate, so the peasants protested by blockading the highway.

On 13th October, 2022 the Tamil Nadu Lake and River Irrigated peasants Association protested in Trichy. They demanded withdrawal of the Electricity Amendment Act, reduction in fertilizer price hike, supply of urea fertilizer without any shortages through cooperative societies, construction of barrages on Cauvery river and measures to save rain water in lakes and ponds. Hundreds of peasants and agricultural workers carrying begging bowls took part in the demonstration and raised slogans.

Tirupur district peasants staged a road blockade in front of Aavin’s milk processing center on the Tirupur – Palladam road. Peasants accused the Aavin cooperative societies in Tirupur district of not procuring complete quantity of milk from the peasants. They accused the authorities of fixing low procurement prices for the milk. They wanted the government of Tamil Nadu to accept and fulfil the demands of the milk producing peasants.

In the water-rich Thanjavur district, the government is acquiring the lands of peasants, to build a bypass road in Kandiyur Upper Tirupandhurithi, Lower Tirupandhurithi and other areas. In this protected agricultural zone, livelihood of the peasants is being completely destroyed due to the acquisition of the agricultural land for the construction of the bypass road. The peasants of Thanjavur district have requested the government of Tamil Nadu, in a memorandum to the Thiruvaiyaru District Collector, to immediately stop the road construction project which is destroying the fertile agricultural lands that grow paddy, coconut, betel and vegetables.

In Salem and various places, peasants protested against the Chennai – Salem eight-lane highway project and demanded that it be abandoned. The agitating peasants pointed out that this will lead to the destruction of livelihood of lakhs of peasants and damage to the natural environment.

The central government is planning to build a second airport in Chennai. The authorities have identified a location at Paranthur in Kanchipuram district, which is 68 Kms away from Chennai. This is a vast fertile agricultural land. For the purpose of building the airport, the government is planning to acquire about 7000 acres of this agricultural land and hand it over to the big corporate builder firms. The peasants of this area have been continuously opposing this move by holding demonstrations and protests, pointing out that this would completely destroy their livelihood and uproot them from their lands.

Struggles demanding crop insurance and protection against destruction of crops 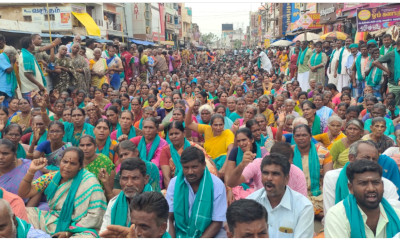 Thanjavur district peasants protested against the non-payment of crop insurance and the cutback of funds in the Pradhan Mantri Kisan Yojana (PMKY) scheme. Peasants gathered at the Thanjavur collectorate office and raised slogans against the central government’s reduced allocation of assistance to the PMKY scheme from Rs 19,000 to Rs 16,000 crore.

Due to intensifying northeast monsoon, crops in Thanjavur district and many other parts of Tamil Nadu have been submerged in flood water. Many crops, including the samba paddy crop are submerged and rotting. This is because the drains and canals are not desilted, leading to flooding. The peasants are demanding that steps be taken to desilt the drains and waterways and adequate compensation  be given to the affected peasants.

In Trichy district, on September 30, Tamil Nadu Lake and River Irrigated Peasants Association protested against the shortage of urea, potassium and fertilizers in agricultural marketing centers and the non-payment of compensation for the crops affected by floods in the Cauvery and Kollidam rivers at Collector’s office. They raised slogans holding empty fertilizer bags and decayed banana plants in their hands.

The agriculture association has demanded a compensation of Rs.30,000 per acre of paddy and Rs.1 lakh per acre of bananas.

On September 23, a large number of peasants of the National South Indian River Link Peasants Association staged a protest in front of the Trichy District Collector’s Office highlightng their various demands, including pension. They pointed out that whether one owns agricultural lands, cultivates on leased / mortgaged land or is an agricultural wage labourer, they are all peasants. But the government has issued a statement that only those who have patta land will be considered as peasants and be given a support amount of Rs.6000/- per year. The peasants condemned it as a ploy to divide them, declaring that the government has the responsibility to protect all peasants.

Refusal of Banks to give agricultural loans to growers of banana and many other crops as well as to those cultivating in temple lands, denial of support amount of Rs.6000/- to peasants who have been farming in temple lands for generations, refusal to give patta for the lands being cultivated for over 60 years by Narikuravas and instead arresting them, all such attacks were condemned by the protesting peasants.

The Tamil Nadu Sugarcane Peasants’ Association agitated for various demands at Nellikuppam in Cuddalore district. On October 7, they staged a demonstration in front of the EID Parry Sugar Mills at Nellikuppam, carrying sugarcanes in their hands. The protesting peasants raised slogans in support of their demands, which included a procurement price by the Tamilnadu government of Rs 5000 per ton of sugarcane; registration by sugar plant managements of peasants who plant sugarcane varieties notified by the Tamilnadu government; immediate payment to the peasants of the profit share amount for the year 2003-04 and 2008-09 and the amount withheld in the name of wastage.

Sugarcane Peasants Association in Kallakurichi held a protest on October 19, in front of the District Collector’s office, in support of  their demands. They urged that the government should nationalize and run the Kalaiyanallur Dharani Sugar Mills and immediately pay the outstanding dues for the sugarcane procured by the Dharani Sugar Mill from the peasants in 2018-19.

The Samyukta Kisan Morcha (SKM) has given a call to the peasants to organize protests and rallies across the country on November 26 to mark the second anniversary of the peasants’ protests on the borders of Delhi. The agricultural organizations in several districts of Tamil Nadu organised militant protest marches on November 26.