For the past several months, fisherfolk in Kerala have been opposing the construction of the port at Vizhinjam in Thiruvananthapuram, being built by Adani Ports and SEZ Ltd, one of the biggest corporate houses of India, headed by Gautam Adani. 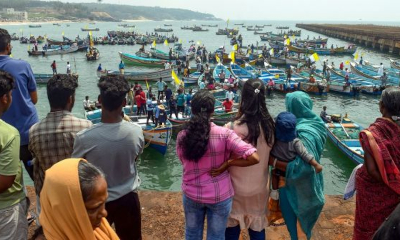 The protesting fishermen have complained that the project, valued at about Rs 7,525-crore ($900m), is causing coastal erosion and destroying their livelihoods. Many of the protesters’ homes have been destroyed by coastal erosion, forcing them to live in terrible conditions in temporary shelters.

Since August 16, the protesting fisherfolk have been sitting on dharna on the main road leading to the seaport, resulting in the construction work being stopped.

Defying the orders of the Kerala High Court, on November 26, protesters prevented the company’s vehicles from entering the construction site. Police arrested several of the protestors on various charges.

On November 27, hundreds of protesters went to the local police station, demanding release of their comrades. The police launched a savage attack on the protestors. More than 30 fisherfolk were injured in the police lathi charge. The police have registered FIRs against nearly 3000 people, according to news reports.

The struggle of the fisherfolk of Vizhinjam in defence of their livelihood is entirely just.