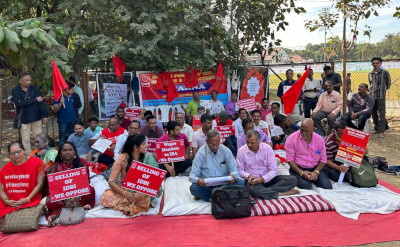 IDBI workers have been fighting unitedly against the sale of IDBI to private and foreign players. On 9 December 2022, the United Forum of IDBI Officers and Employees organised a dharna outside the IDBI Bank head office, Cuffe Parade, Mumbai, to oppose the privatization of IDBI. Soon after the dharna started, police authorities moved the protesting workers from the head office premises to Azad Maidan, where the demonstration continued.

The United Forum has launched a nationwide campaign and created videos and posters in order to spread awareness about bank privatisation through social media. In October 2022, they organised a successful Twitter campaign using the hashtags #SaveIDBI and #PM_निजीकरण_मंजूर_नहीं.

The government and LIC, which hold more than 94% stake in IDBI, are looking to sell 60.72% of their stake. The deadline for submitting an expression of interest has been extended from 16 December 2022 to 7 January 2023.

It has been reported that after the RBI recategorised IDBI as a private sector lender in 2019, its metro and urban branches stopped providing interest subvention (a grant by the government which allows the repayment of EMI loan to start after the possession of the property has been taken by the buyer) on Kisan Credit Card loans to farmers. If IDBI is sold to private or foreign companies, semi-urban and rural branches of the bank may stop giving loans to farmers. Privatisation will also affect small business and education loans.

It is certain that privatisation of the bank will harm depositors, students, farmers, and beneficiaries of social security schemes. This privatisation is against the interests of society.

The agitating workers are committed to continuing their movement for saving IDBI. In January–February 2023, the United Forum of IDBI Officers and Employees is planning a dharna in Delhi. A memorandum opposing the privatisation of IDBI will be submitted to the Department of Investment and Public Asset Management (DIPAM).

The struggle of IDBI workers against privatisation is in defence of the interest of society. It must be supported by all workers and working people.