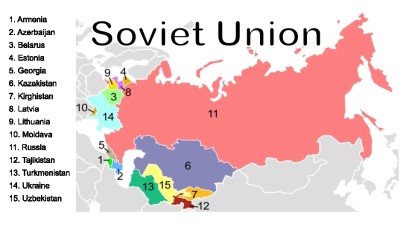 The 30th of December this year marks 100 years since the formation of the Union of Soviet Socialist Republics (USSR).  It was formed as the result of the voluntary coming together of the Russian, Ukrainian, Byelorussian and Transcaucasian Soviet Republics.  They were national and multinational states consisting of nations and peoples who had been liberated from the rule of the bourgeoisie by the Great October Revolution in 1917. They had embarked on the path of carrying out the transition from capitalism to socialism, with power being exercised by soviets, which were political mass organisations of working people of town and countryside.

The morning of 30th December, 1922, witnessed thousands of people in colourful national costumes entering the Bolshoi Theater in Moscow. Among them were envoys from Russian towns and villages, sons and daughters of the people of Ukraine, delegates from the factories and fields of Byelorussia, representatives of the multinational Caucasus and of many other nations and nationalities.  There were 2,215 delegates in all.

The overthrow of bourgeois rule and establishment of soviet power under the leadership of the proletariat and its vanguard party created both the necessity and the possibility for a voluntary union.

It was necessary for all the soviet republics to unite, in order to defeat the counter-revolutionary offensive of the imperialist powers.  It became possible because of the internationalism of the proletariat and its party.  It was a result of the respect the Bolshevik Party, headed by Lenin, had won in the hearts and minds of all the oppressed peoples.

The Bolshevik Party represented the best interests of the proletariat, which needs to unite with all the oppressed in order to defeat the bourgeoisie.  It put its full weight behind the move to unite all the soviet republics in a voluntary union.  The advance in the economic and social conditions of the working people inspired other nations and peoples to join this historic project of construction of socialism.

Many more nations voluntarily joined the Soviet Union in the subsequent years.  By 1940, the USSR consisted of 16 union republics and numerous autonomous republics, autonomous regions and areas.

In February 1935, the Seventh Congress of Soviets of the USSR passed a decision to change the Constitution of 1924. This decision was based on the recognition that vast changes had taken place over the past decade. The relation of class forces within the country had completely changed.  A new socialist industry had been created. The class of capitalist farmers had been eliminated as a class. The collective farm system had triumphed. Socialist ownership of the means of production had been established in every branch of national economy.

The victory of socialism made it both possible and necessary to further democratize the electoral system.  The times demanded the introduction of universal, equal and direct suffrage with secret ballot.

The new Constitution of the U.S.S.R, which was adopted in 1936, was drafted by a Constitution Commission set up for the purpose, under the chairmanship of Joseph Stalin. The draft was thrown open to nationwide discussion, which lasted five and a half months.  The number of written suggestions from the people was more than 150,000. Comrade Stalin himself is known to have read tens of thousands of the people’s letters.  The draft was edited and submitted to the Extraordinary Eighth Congress of Soviets for adoption.

The 1936 Constitution, popularly called the Stalin Constitution, further strengthened the definition and guarantee of individual and collective democratic rights, including national rights.  It guaranteed to every adult citizen the right to work, right to public education and health care, to old age protection as well as the right to elect and be elected, the right to select candidates among those nominated by mass organisations or political parties.

The highest level of decision-making power was vested in the hands of the Supreme Soviet, which consisted of two chambers.  One was the Chamber of the people and the other was the Chamber of nations and nationalities, in which there was equal number of representatives from every Union Republic, a smaller number of equal representatives from every autonomous republic, and similarly for autonomous regions.  The principle of equality of nations, big or small, found concrete expression in the state structure.

The proletarian internationalist policy of the USSR explains the remarkable self-confidence and death-defying courage which the Soviet Red Army and peoples displayed during the Second World War. They liberated the whole of the Soviet Union from the jackboots of the Nazi fascist occupiers.They played the most critical role in inflicting a death blow to Nazi Germany and its allies and made a decisive contribution to the liberation of Europe from fascist occupation. Following the defeat of the fascist axis and end of the war, the Soviet Union stood out as the most outstanding example of a modern democratic state.

The revisionist turn, which took place starting with the 20th Congress of the Communist Party of Soviet Union in 1956, paved the way for the degeneration of socialism and restoration of capitalism in the USSR.  Over the following decades, it led to the degeneration of soviet democracy, re-emergence of national oppression and all other evils of capitalism and bourgeois rule.  It resulted in widespread discontent within the union, which became a social-imperialist state, socialist in words but imperialist in deeds.

In spite of the restoration of capitalism in the USSR and its conversion into a social-imperialist state, the right of nations to self-determination remained guaranteed by the Constitution.  That is why it became possible for Russia, Ukraine, Georgia and many other constituents of the USSR to become separate independent states in 1991, without any bloodshed.  It proves that each of them actually enjoyed the right to secede from the Soviet Union.  They could freely exercise this right.

The rights that were enjoyed by every nation and nationality within the USSR stands in stark contrast with the denial of national rights within multi-national bourgeois states.  A peaceful secession is unthinkable for the nations and peoples who are part of the Indian Union, or of Britain, Canada or some other bourgeois state.

Bourgeois states, both in advanced capitalist countries and in the so-called emerging capitalist powers such as India, do not respect or protect the right of nations to self-determination within their own territories.  Their constitutions do not guarantee this right.

In our country, any nation, nationality or people who demand their right to self-determination are treated as enemies of the unity and integrity of India.  National movements are treated as “law and order” problems.  They are met with brutal repression.

The bourgeoisie wields state power by trampling on the rights of other classes, and on oppressed nations and peoples whose territory they control and plunder.  The proletariat pursues its project of building socialism by protecting the rights of every constituent people to determine their own destiny.  This was demonstrated by the proletariat and its party which were directing the course of development in the Soviet Union.

The formation of the USSR remains a shining example of a multi-national state that defends the rights of all its constituent peoples and works for their mutual benefit.  For our country, which is home to numerous nations, nationalities and peoples, the experience of the USSR presents invaluable lessons.

The most important lesson to draw is that the creation of a voluntary union in place of the present colonial style Indian Union is the only way to resolve the national question and lift our society out of crisis.  Workers’ and peasants’ rule through a voluntary union of republics is the vision with which we Indian communists must wage the class struggle.