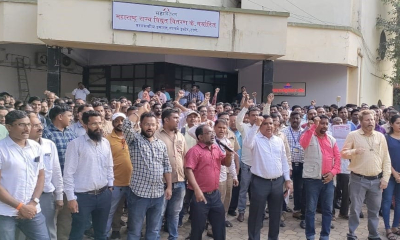 Workers across several sectors took to the streets right through the year in 2022 to oppose the anti-social and anti-worker program of privatisation. Trade unions representing workers of different public sector enterprises are coming together on a common platform and extending support to each other in the struggle against privatisation. A joint meeting of workers from across sectors like electricity, banks, railways, teachers, and people’s organizations held in Pune, Maharashtra on 12th June, passed a resolution to unitedly fight against all forms of privatization in whichever sector. 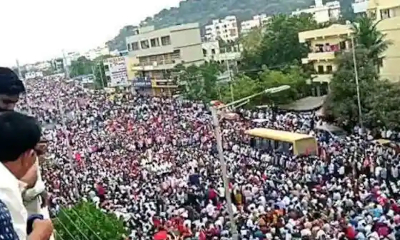 Workers from insurance, banks, railways, electricity supply, road transport, airlines, telecommunication, coal and steel plants, sanitation, healthcare, education, ASHA and Anganwadi, protested for better working conditions and wages, and against insecurity of employment. They resisted contractualization and anti-worker laws. They fought for their right to organize.

Crores of workers participated in the All India general strike on 28th-29th March in support of a common charter of demands. The striking workers went on strike against all odds – ESMA in some cases, intimidation, and obstructions of all kinds including the high handedness of police in some cases and a high court order in Kerala prohibiting strike by BPCL and government employees. 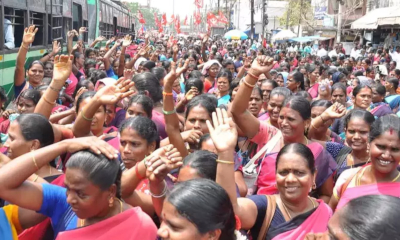 The workers and employees in banks, insurance companies stayed away from their offices all across the country. Workers in coal, Vizag steel, oil and LPG plants, power grid, electricity, copper, ports, telecom and cement struck work from the morning of 28th March. Electricity workers in Maharashtra and road transport workers in Haryana defied ESMA invoked by the respective state governments. The employees of railways and defence sectors organized demonstrations at more than one thousand places across the country.

Aanganwadi, ASHA, Mid-day Meal and Domestic Workers, Construction, Beedi and Agricultural Workers, hawkers and vendors joined the strike and participated in protest actions in Chakka jam, road roko, rail roko programs in various parts of the country. There was massive participation of the central and state government employees in the strike throughout the country particularly in postal, income-tax and other major departments. 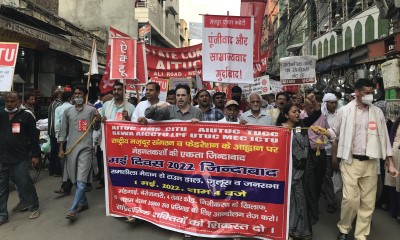 Private sector industrial units including many MNCs witnessed massive strike action on both the days in Maharashtra, Karnataka, Tamil Nadu, Telangana and Haryana.

All across the country, workers held protest marches and rallies on Mayday. Workers participated in joint actions in state capitals and cities in several states. 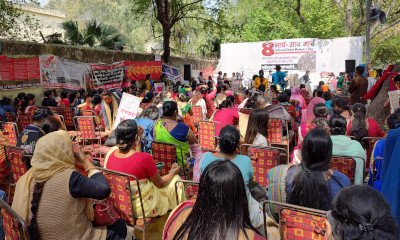 Electricity supply workers across the country participated in militant struggles to oppose the programme of privatization of electricity distribution.

2022 began with the then just concluded 3-day strike of electricity workers of Jammu & Kashmir on 21st December 2021 against the decision of the government to privatise power distribution in the Union Territory. Workers won the support of the people for their cause. People supported the strike despite the black outs they had to suffer in the cold. The government was forced to put its proposal on hold. In December 2022, the workers of Puducherry’s electricity department went on strike against privatisation. They withdrew their strike only after the government assured that the process of privatisation of electricity distribution would not be pushed through. Striking workers of Jammu & Kashmir and Puducherry were supported by electricity workers in other states. 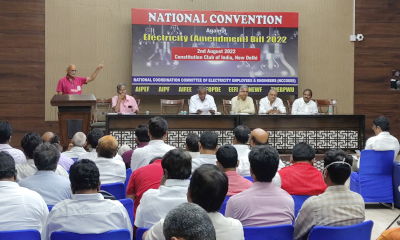 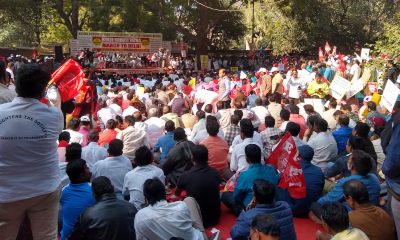 On 2nd August, electricity supply workers participated in a National Convention held at the Constitution Club in New Delhi to protest against the Electricity (Amendment) Bill 2022. Workers across more than 25 cities participated in a “Cease Work Action” called by the National Co-ordination Committee of Electricity Employees & Engineers (NCCOEEE) on 8th August, the day the Electricity (Amendment) Bill 2022 was tabled in parliament. Under the banner of ‘Bijli Kranti Rally’, thousands of electricity supply workers from all parts of India came together on 23rd November in a protest demonstration at Jantar Mantar in New Delhi. Electricity supply workers in Maharashtra are currently busy in preparations for an indefinite strike starting from 18th January 2023 to oppose the handing over of state government-owned hydro-electric power plants to private companies and handing over the operation of new sub-stations to private contractors.

Rail workers have been militantly opposing the government’s policy of privatization of railways. Different sections of rail workers, like loco pilots, guards, track maintainers, station masters, signaling staff, etc., have organised protest actions in support of their demands pertaining to their service conditions and against privatization. On 4th August 2022, loco pilots organized under the leadership of the All India Loco Running Staff Association (AILRSA) staged a dharna outside parliament. In September thousands of track maintainers held a militant rally in Delhi protesting against their sub-human conditions of work which results in about two fatalities a day in the course of duty. 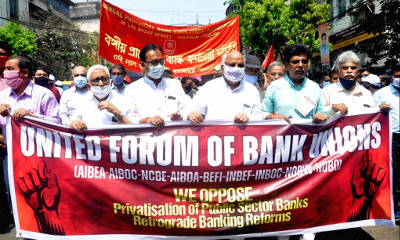 Bank workers have been protesting in different parts of the country against privatisation of banks and increasing contractualisation of workers. They have been protesting against the loot of public money by the government by writing off crores of rupees of loans to big capitalists in the name of NPAs. They reached out to the people with massive signature campaigns across the country, and videos and posters explaining the effects of privatisation on customers.

The United Forum of Bank Unions put forward their demands at a dharna in Delhi on 21st July. Their demands included a recall of all plans of privatisation under any name, cessation of increasing attacks by the bank management, stopping transfers to harass employees, stopping unfair labour practices like outsourcing permanent jobs, and job security.

Central and state government employees observed 28th May as ‘Demands Day’ to intensify their struggle demanding filling up of vacant posts in Public Sector Units (PSUs) and Government Departments. Unions of railways, post and telegraphs, etc., vigorously participated in the action. Government employees throughout the country have also been demanding that the New Pension Scheme be scrapped and the Old Pension Scheme restored.

Road Transport workers in several states like Punjab, Haryana and Maharashtra and road construction workers in Arunachal Pradesh went on strike, during the year, to demand regular employment and wage payments.

Time and again ASHA and Anganwadi workers in different states have been protesting for their rights to be recognized as workers and to be paid the statutory minimum wages along with other benefits such as paid sick leave, maternity leave, gratuity, pension, etc. They have organised huge demonstrations in the country’s capital in support of their demands like on 8th March, International Women’s Day. In Delhi, thousands of aanganwadi workers and helpers organised under the banner of Delhi State Anganwadi Workers and Helpers Union (DSAWHU), rallied outside the Delhi Chief Minister’s house. Later in the year, on 4th November, they demonstrated outside the Aam Aadmi Party headquarters demanding the reinstatement of 800 terminated workers, against whom action had been taken for participating in protest actions organised by their union.

Nurses at government-run hospitals of Delhi and other cities of the country have been fighting against termination of their services. These nurses had been hired during the Covid pandemic. They had risked their lives to provide health care to people. Now they are being callously thrown out of their jobs. 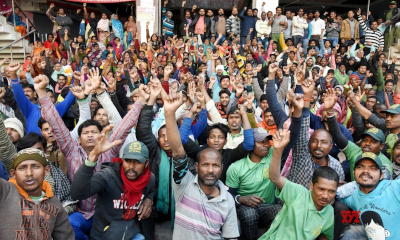 Sanitation workers have been protesting for better wages, better working conditions and regularization of their employment. The story of most workers in the sanitation sector is the same throughout the country. Increasing contractualization and long overdue payments have made the lives of sanitation workers extremely difficult. 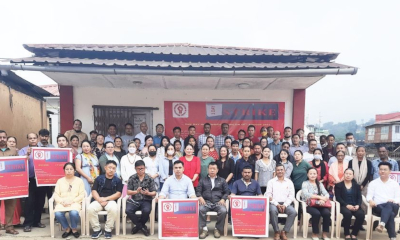 More than three lakh workers of India Post, including workers of Railway Mail Service (RMS), Mail Motor Service (MMS), Post Office Bank Service (POBS) and Gramin Dak Sevaks, went on a one-day strike on 10th August. The strike was organised under the banner of Postal Joint Council of Action (PJCA), a joint platform of several postal workers’ federations. The strike was supported by all major Central Trade Unions. Postal workers have been repeatedly pointing out that the privatisation of postal services is leading to deterioration of these services in the more remote areas of the country. It is against the general interest of society.

Kisans of Punjab, Haryana, Uttar Pradesh, Rajasthan, Tamil Nādu, Maharashtra and other states have continued their struggle for their demands. They organized rail-roko and other militant protests in support of their demand for implementation of the promises made by the central government in December 2021. Kisans are demanding assured public procurement of their produce at remunerative prices, MSP for all crops, for state subsidies for agricultural inputs, for better irrigation facilities, for loan waiver and against the Electricity Amendment Bill. They are also demanding compensation to farmers whose crop was damaged due to rain and pest attack, compensation for managing paddy stubble, adequate compensation to farmers for land acquisition, compensation to dairy farmers whose livestock died due to lumpy skin disease. Kisans are also fighting for water for irrigating their fields. They have also continued to wage struggle for justice for the murder of agitating kisans in Lakhimpur Kheri and withdrawal of false police cases against agitating kisans.

On 27th November, the second anniversary of the launch of their agitation, kisans demonstrated in front of the governor’s house in the state capitals of the country, where they reiterated their demands that remain unfulfilled despite promises.

The year 2022 saw growing unity of workers and peasants against the anti-worker, anti-peasant, anti-social program of the bourgeoisie. Trade unions of workers as well as of kisans and agricultural workers participated vigorously in the All India General Strike of March 2022. The protest rallies organised by kisan unions on November 27 in different state capitals, saw vigorous participation of workers unions.