All the capitalist countries are engulfed in an economic crisis which is ever deepening. The imperialist bourgeoisie has been shifting the burden of the crisis onto the backs of the working class and people. In the US and Canada, Britain and other countries of Europe, the attacks on the livelihood and rights of working people carried out in the name of the Covid pandemic in the two years previous further intensified in 2022, in the name of the war in Ukraine. 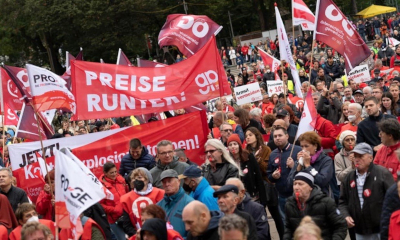 The masses of working people did not take this quietly. They expressed their anger at the growing unemployment and soaring prices of essential commodities.  A popular slogan raised by the striking workers and displayed in banners in many of the strike actions was “Freeze Prices, Not Wages”.

The workers opposed the taking over by the monopolies of public services such as transport, health care and education. They denounced the cutbacks in social services. Working people raised their voices against militarisation and the participation of their countries in the warmongering NATO alliance. 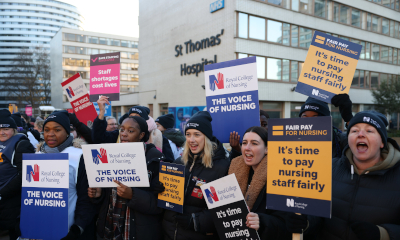 On 18th June, tens of thousands of workers marched through the streets of Central London. Workers of many sectors took part in it. Students participated in large numbers. Hundreds of banners and placards carried by workers reflected the demands of different sections of the people.

As many as 100,000 members of the Royal College of Nursing (RCN) – the UK’s biggest nursing union – participated in a strike in England, Wales and Northern Ireland on 15th December. It was the largest strike in the RCN’s 106-year history. These health workers working for the National Health System (NHS) of the UK had been demanding better working conditions right through the pandemic and thereafter. But their demands were ignored and they were expected to work in severely understaffed wards and at wages that have remained stagnant for years.

In Europe, workers expressed their widespread anger against the attacks on their living standards.

In France, four workers’ unions of the SNCF (the state-owned railways of France) – CGT, UNSA, SUD-Rail and CFDT – went on strike on 6th July demanding wage increases. The strike paralysed train services throughout the country. Nearly 1,00,000 workers from various industries and sectors held militant protest demonstrations in many cities across France on 18th October. They demanded pay increases to meet the rising cost of living. They pointed out that while the monopoly capitalists were making massive profits, workers were being told their pay cannot be increased, that there is no money.

Workers in Belgium went on a country-wide strike on 20th June. A mass demonstration was organised in the capital, Brussels on the same day. More than 80,000 workers from three major labour federations participated in the demonstration. Strikes took place in several sectors, particularly in transport, bringing the country to a standstill. Similar demonstrations had been organised throughout Belgium in February, April and May of 2022.

Likewise, the workers of the Czech Republic, Austria and Italy protested their governments’ refusal to address the crushing costs of living increases and the downgrade in living standards. Tens of thousands of working people demonstrated in these countries through the year. In Italy, working people refused to pay their electricity bills, which have shot up 300-400 % during the year, and publicly burnt them in the streets.

Across Europe, workers opposed the US-led moves to fuel the war in Ukraine. Workers raised the slogans, “Money for Wages, Not for War! “, “Stop NATO!”. They saw clearly that it was the sanctions against Russia and the increasing expenditure on militarisation that were fuelling prices. They demanded that their government stop spending on war and instead, start investing in the well-being of the working people.

Thousands of people participated in actions to protest against the NATO summit held in Madrid, Spain 28th-30th June. The protest actions took place in defiance of the ban on them. 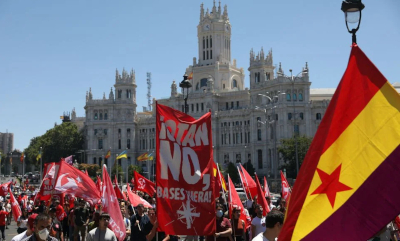 Tens of thousands of people participated in marches in the cities of France, Belgium, Moldova, the Czech Republic, Hungary, and Germany demanding an end to the sanctions on Russia that have resulted in economic distress for many households and businesses.

In Germany, hundreds of protesters joined in a week-long encampment from 19th-26th June near the Ramstein base, the largest American air base outside the U.S. People demanded the closure of Ramstein and removal of all U.S. bases from Germany. Protest actions took place in Dusseldorf, Berlin, Cologne and other cities, against the rising costs of energy and the war in Ukraine.

Several Canada cities also witnessed rallies, protest meetings and virtual meetings that were held to condemn the NATO Strategic Concept 2022 summit, to condemn the war-mongering and war preparations and demand that NATO be disbanded.