Haldwani, in Uttarakhand, has been the scene of unprecedented protests by people against the threat of forcible eviction from their homes by the government of Uttarakhand. The protests began following the order of the Uttarakhand High Court on December 20, 2022, which authorized the use of force to evict thousands of families from 78 acres of land in Banbhoolpura claimed by the Railways. It asked the state to deploy paramilitary forces to evict the people from their homes. Following this, the Uttarakhand government issued a notice of eviction on 1 January, 2023 giving the people just 7 days to clear their belongings and leave their homes. 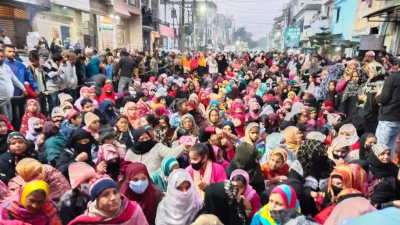 The people refused to abandon their homes. In the biting cold, fifty thousand women, men and children sat on indefinite dharna, asserting their right to their homes. In the face of this struggle, on January 5, the Supreme Court announced its decision to stay the High Court order on evicting the people.

The Indian Railways has not given any proof of ownership of the land of Banbhoolpura, which it is claiming as railway land. Many of the people faced with the threat of eviction have lived in this slum basti for over 5 decades. People have documents proving they owned property in the area since 1947. Why then is the Indian state, and the railways, pushing for eviction of people from their basti?

The answer lies in the drive of the Indian state for privatisation of the Indian Railways, most recently through the National Monetisation Pipeline (NMP). The government has announced amongst other things, its decision to hand over 200 railway stations to capitalists for development and maintenance. Indian Railways has established a Rail Land Development Authority, to deal with the prime land owned by Indian Railways throughout the country.

Kathgodam station near Haldwani, part of the North East Railways, is one of the stations earmarked for handing over to capitalists to develop and maintain. It is one of the major stations connecting Uttarakhand with other parts of the country. The Banbhoolpura slum is near the Kathgodam railway station. It is very likely, that the urgency of the Uttarakhand government, and the North Eastern Railways, to evict people living in this area for several decades, is stemming from the desire to fulfil the demands of the private capitalist who is going to be handed over Kathgodam railway station and the land around it. 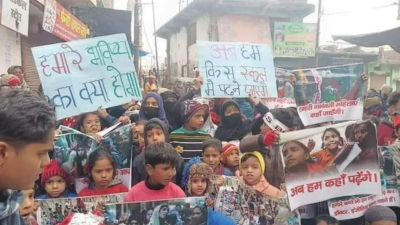 The laws of the Indian state enable it to take over the land of the people under one or the other pretext, and then hand it over to big capitalist developers. It is the experience of our people all over the country that entire colonies where people have been living for decades are razed to the ground by the state for this purpose. In order to prevent public support for the victims, the state carries out incessant propaganda calling those whose homes have been destroyed as “illegal occupants”.

The struggle of the people of Haldwani against eviction from their homes is part of the same struggle of millions of working people all over the country, over whose head the dagger of demolition stands. People living near the metro lines, people living near railway stations and railway lines in different cities face demolition. The drive of the Indian state for selling railway stations and other assets to capitalists needs to be resolutely opposed.