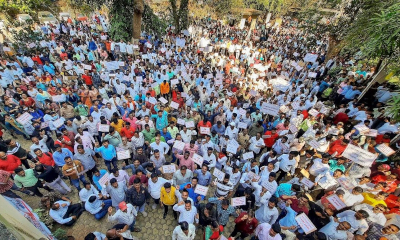 At the All-India level, the bourgeoisie is demanding the passing of the Electricity (Amendment) Bill 2022. This will facilitate privatisation of the distribution networks of state electricity boards. Simultaneously, various state governments are privatising electricity supply, without waiting for the passing of the Electricity (Amendment) Bill.  Private power companies Adani Power and Torrent Power have filed applications for parallel distribution in large highly profitable parts of Maharashtra which are predominantly urban industrial centres. Similarly, Tata Power is reported to have sought complete takeover of power sector in parts of Maharashtra. Their motive is clearly to take over distribution of power in those areas which are viewed as highly profitable.

The Maharashtra electricity workers responded to these imminent attacks by the bourgeoisie. More than 30 unions of engineers, workers and officers including the Maharashtra State Electricity Workers’ Federation and Subordinate Engineers’ Association formed a Samyukta Sangharsh Samiti called the Maharashtra Rajya Veej Karmachari, Abhiyante, and Adhikari Sangharsh Samiti. Together with Kamgar Ekta Committee, and other workers’ and people’s organisations, they launched a public campaign against privatisation. They highlighted that electricity will get much more expensive for the masses of working people.

The Samyukta Sangharsh Samiti declared that nobody has the authority to hand over public assets built by the labour of workers and through the tax money of people to private hands. It demanded the regularisation of over 30,000 contract workers, who had been working for years on end in highly exploitative conditions, with no social security. It organised a massive demonstration in Nagpur in the last week of December 2022 in front of the Vidhan Sabha in which thousands of workers participated.

The electricity workers started their strike on 4th January 2023 in the face of the threat of the Maharashtra government to use Maharashtra Essential Services Maintenance Act (MESMA) against the striking workers. Organisations of power sector workers from all over the country demonstrated their support to their brothers and sisters from Maharashtra, while the unions from adjoining states, refused to enter Maharashtra as strike breakers.

Seeing that electricity workers are firmly united and sensing that the support of working people of the state to their struggles is growing, the Maharashtra government had no option but to come to the negotiation table and partially concede some of their demands.

Electricity workers need to understand that this is a temporary step back taken by the Maharashtra government. Workers cannot afford to believe the promises made by bourgeois governments. Electricity workers will need to further intensify the struggle and broaden it to include masses of working people all over the country in order to defeat the privatisation plan of the capitalists.

In a modern society, electricity is a basic need of every human being along with food, shelter, basic education, health care, safe drinking water, transport, communication etc. That is why access to good quality of these services at affordable prices is an essential part of the Right to Life and hence should be considered as a universal human right. The State is duty bound to ensure that every human being can enjoy this right.

However even 75 years after independence, crores of rural and urban homes do not have any access to electricity, or use the barest minimum of electricity because they cannot afford the charges. There is a need to expand electricity generation and distribution in a planned way and ensure that the growing needs of every Indian are satisfied.

The class struggle that is going on over electricity is about who should own this vital productive force and what should be the aim of its production and distribution.

On one side, the monopoly capitalists view electricity supply as a source of maximum profits for themselves. Using their stranglehold over major political parties, and over the Indian state, they have ensured that every government implements the program of privatisation of electricity supply.

On the other side are the power sector workers and broad masses of working people who are insisting that electricity is an essential necessity for fulfilling the growing needs of the whole of society, and it is a universal human right. They are insisting that private profit cannot be allowed in this field, for it will never satisfy this human right.

Since 1991-1992, every government at the Centre and most of the states have pushed for increasing privatisation of the power sector. First the power generation sector was opened for private players. Then through the Electricity Act 2003, most of the State Electricity Boards (SEBs) were dismantled and instead trifurcated into Power Generation, Power Transmission and Power Distribution companies. This was done, not only to break the unity and hence decrease the strength of the workers, but it also facilitated the easy entry of private capital into profitable power generation and distribution.

All these actions were of course taken by giving promises of better quality, cheaper and easily available electricity for all. The experience of people however has been that electricity has become much more expensive and not easily available at all, while on the other hand the private companies continued to earn huge profit. This just proved the fact that the real aim of these so called “reforms” was not to serve the people but to fatten the private companies.

By its very nature, the greed of capitalists can never be satisfied; they always want more and more. To facilitate that, the Central government has been pushing since 2014 to bring further reforms by way of the Electricity (Amendment) Act. The aim of these reforms is to hand over lakhs of crores worth of generation, transmission and distribution infrastructure built with people’s money and labour to private capitalists at throw away price and to make it easier for entry of private players in electricity distribution.

In a remarkable show of unity across the country, power sector workers working at various levels have heroically resisted attempts of the Central government to enact the Amendment Bill. They have not bowed before the repeated threats of the government to throw them out of their jobs. They have exposed how over the last 30 years various governments have systematically weakened the public sector power companies. The militant struggle of electricity workers against privatisation is a source of inspiration to all workers who are fighting valiantly against privatisation and attacks on their livelihood and rights.

Privatisation of public sector enterprises is a program being directed by the monopoly capitalist groups of our country.

To defeat this plan in its entirety requires a complete reorientation of the entire economy. At present, the orientation is to generate maximum profits for Indian and international monopoly capitalists. This has to be turned around. The production and distribution of goods and services need to be driven by the motive of maximum possible fulfilment of the rising material and cultural needs of the entire population.

As the struggle against privatisation intensifies across the country, more and more working people through their life experience are reaching this conclusion.