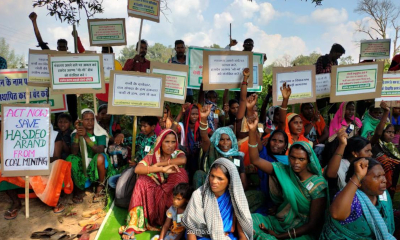 Below the Hasdeo Aranya forests in Chhattisgarh is a coalfield comprised of 22 coal blocks. In 2010, the Central Government categorised Hasdeo Aranya as a “no-go” zone for mining and ruled out mining in any of these blocks. However, just a year later, the Ministry of Environment, Forest and Climate Change (MoEF) granted clearance for mining for one coal block. At present, of the 22 blocks, seven blocks have been allotted to different companies.

Over the past few years, there have been powerful protests by people in the area against coal mining, because of the environmental destruction it is causing to the rivers, the forest and the fertile rice fields of the peasants. As a consequence of the struggle, the Chhattisgarh government was forced to revoke mining licenses issued to APMDC and CSGPC. However, mining continues in three blocks owned by the Rajasthan government — Parsa, Parsa East Kete Basan Phase II and Kete Extension.

The opposition of people living in the area to coal mining has been so intense that the Chhattisgarh Assembly unanimously passed a private members resolution in July 2022 asking the central government to cancel all mining projects in the Hasdeo Aranya forests. The members of the ruling Congress Party and the opposition BJP voted in favour of the resolution. Each party shifted the responsibility of stopping mining on the other.  The Chief Minister said since it was the Center that decided allotment of mines, the Central government should decide whether mining should continue or not. On the other hand, the opposition BJP said that the state government should use its powers to withdraw clearances to the mine developers and operators.

On December 21, 2022, the Supreme Court refused to stay coal mining at Parsa in the Hasdeo Aranya Forest, rejecting pleas of petitioners challenging the land acquisition for the block. It declared “We don’t want to come in the way of development and we are very clear on that.”

When the bourgeoisie talks about development it means capitalist development — increasing the wealth of monopoly capitalists at the cost of the wellbeing of society.

The Parsa East- Kente Basan block located in Chhattisgarh was awarded to RRVUNL in 2007. RRVUNL issued a tender seeking Mine Developer and Operator (MDO) services. The tender was won by Adani Enterprises. Mining began in 2013. Beginning with 2 million tonnes of coal a year, it has been producing 15 million tonnes a year from 2017 onwards.

Many coal mines in Chhattisgarh and other states, are being run according to the Mine Developer and Operator (MDO) model. According to this model, the coal block owner contracts out the entire operations to a third party, which takes the responsibility of mining, developing and operating the particular mine by investing in it. It then supplies the coal at a tender determined price to the power plants of the mine owning state electricity boards.

The MDO model has become a vehicle for capitalist monopolies to make maximum profits by looting the state electricity boards, which are the nominal owners of the mines. The terms of the contract are kept secret from the public.

In this case, what is known publicly is that according to the contract, the Rajasthan Electricity Board will only purchase coal which has energy content of at least 4000 kilo calories per kg. Coal with less energy content is rejected.

The average quality of coal used in government and private power plants is of energy content 3,400 kilo calories per kg. Private industries in Chhattisgarh use coal with energy content much lower than even this. Hence much of the coal that is declared rejected by the state of Rajasthan can actually be used and is being used by privately owned power plants.

The cost of production of coal in privately owned coal mines is estimated to be about Rs 800 per tonne. Rajasthan Electricity Board paid Rs 2,175 per tonne for the coal it got from its mines.

Most of the rejected coal has been sent from the mines to power plants owned by Adani Power in Chhattisgarh and Madhya Pradesh. This includes 2.6 million tonnes of coal sent to Raipur Energen, a thermal power station owned by Adani Power, which paid just Rs 450 per tonne for the coal.

If private power plants could use this coal, the state owned power plants in Rajasthan could also do so. The market price of coal in 2021 was over Rs 7000 per tonne. Thus the Rajasthan government handed over 4 million tonnes of coal, with a market value of about Rs 2800 crores, to Adani Enterprises virtually for free.

The contract between the government of Rajasthan and the Adani group has been worked out to enable the private monopoly capitalist group to maximize its profits. This is another example of how the loot of the public exchequer by monopoly capitalists is being carried out!

The Indian state works to fulfil the drive of the monopoly capitalists to make maximum profits. All the arms of the state — the Central and state governments, the judiciary, the parliament and state assemblies, the principal parties of the ruling class — are committed to fulfilling monopoly capitalist greed.

People cannot afford to have illusions that their interests can be protected within the present system. In this system, political power is in the hands of the capitalist class headed by monopoly capitalists. We must build the unity of workers and peasants around the aim of establishing a new system in which political power will be in the hands of workers and peasants. Then we will be able to ensure that the economy is oriented to fulfilling the ever growing material and cultural needs of the whole of society. Then we will be able to ensure that the natural environment is not destroyed because of capitalist greed.