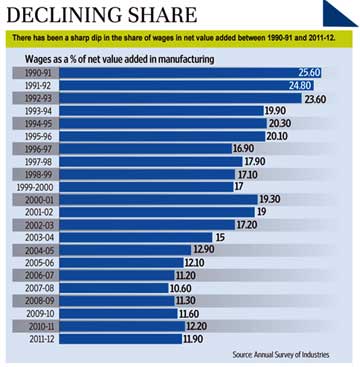 According to the  Annual Survey of Industries (ASI) wages as percentage of net value added has been declining over the last two decades.

According to the  Annual Survey of Industries (ASI) wages as percentage of net value added has been declining over the last two decades.

Some broad trends in the country’s manufacturing sector show that since the liberalization of the economy (taken from 1990-91 because 1991-92 saw unduly depressed profits) till 2011-12, the latest year for which ASI data are available, profits have gone up at a compounded annual growth rate (CAGR) of 19.15%. [this is the growth rate measured year on year, from 1990-91 to 2011-12, over a period of 21 years).

We can compare how wages have grown in the same period. It turns out that the growth of wages between 1990-91 and 2011-12 has been at a CAGR of 10.12%. Growth in profits has been much higher than the growth in wages. If we look at it another way, the share of wages in net value added fell from 25.6% in 1990-91 to 11.9% in 2011-12 [Net value added is the difference between the value of the physical inputs and the value of the output, minus the value of wear and tear of machinery employed in manufacturing]. This means that the rate of exploitation of labour in manufacturing increased from 3 times (300%) to 7.5 times (750%).

At the same time, the average rate of growth in the Consumer Price Index for Industrial Workers has been 7.3% over the period, while average wages per worker have gone up at a CAGR of 7.5%. That means the rise in real wages has been close to nothing.

This intensifying exploitation in the manufacturing sector has been possible because of blatant violations of labour laws that the State has deliberately permitted. Employment of contract workers for jobs of a permanent nature, employment of “trainees” who remain in this category for years, and similar tricks have been used by the capitalist to drive down the wages. The right  of workers to forms unions has been attacked in the name of creating favourable conditions for investment.

The working class must unite to strongly oppose this intensifying exploitation. The graph below clearly shows how much the workers are exploited and the necessity to fight for the elimination of wage exploitation.