With deepest outrage, the CGPI condemns the utterly unjustifiable arrest on August 22, 2014, of Irom Sharmila, the brave activist from Manipur who has been relentlessly fighting for over 14 years for the repeal of the draconian Armed Forces Special Powers Act (AFSPA).

With deepest outrage, the CGPI condemns the utterly unjustifiable arrest on August 22, 2014, of Irom Sharmila, the brave activist from Manipur who has been relentlessly fighting for over 14 years for the repeal of the draconian Armed Forces Special Powers Act (AFSPA). 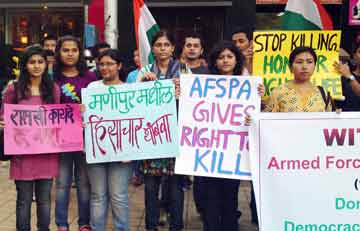 Irom Sharmila was re-arrested just three days after being released from detention when a sessions court found that the state had miserably failed to prove its case that she was attempting to commit suicide (a crime under the Indian Penal Code) by fasting in protest against AFSPA. For 14 years, this farce has been going on, wherein the state, which cannot charge Irom Sharmila with any crime other than ‘attempting to commit suicide’, arrests and incarcerates her, force feeds her, releases her after one year and then rearrests her within a couple of days.  A state which has without any qualms taken the lives of countless innocent people in the North East and Jammu & Kashmir under the cover of AFSPA, repeatedly arrests an activist who is protesting against AFSPA, in the name of ‘saving her life’! In the meantime, the health of Irom Sharmila has gone from bad to worse on account of her repeated incarceration.

This is a violation of every tenet of justice and democracy. It is a clear case of the real criminals trying to brand as a criminal a woman of conscience, whose only activity has been to try and draw attention to the crime – in this case, the unending persecution and violence by the state and its armed forces against the entire peoples of the North East and Jammu & Kashmir.

The existence and continuous use of a law such as AFSPA for 56 years is a wholesale assault on the rights and liberties of our people. AFSPA gives the Central government the right to declare a whole state as a ‘disturbed area’ without even having to consult with the elected authorities of the concerned state. In such ‘disturbed areas’, the armed forces down to the level of non-commissioned officers have the right to kill, torture, maim and forcibly detain any person merely on suspicion or what they consider the ‘likelihood’ of someone committing some offence. They are protected from any legal or judicial punishment for any crimes against the people they commit under this excuse.

Innumerable crimes have been committed under AFSPA. The killing of the villagers of Oinam, and the gunning down of 10 people waiting at a bus stop at Malom, following which Irom Sharmila began her fast, are just a couple of these. The abduction, rape and murder of Manorama Devi, which was followed by mass protests for weeks all over Manipur and other parts of the country in 2004, is another such heinous instance. On a day-to-day basis, AFSPA means that youth are routinely picked up for questioning or beating, homes are broken into in the course of “combing raids”, women are molested and raped, and innocent people are made to ‘disappear’, never to be seen again, after they encounter military or paramilitary personnel.

After the 2004 mass protests, the UPA government was forced to set up an enquiry commission. The Justice Reddy Committee had to admit that “the Act, for whatever reason, has become a symbol of oppression, an object of hate and an instrument of discrimination and high handedness.” Ten years down the line, AFSPA still has not been repealed.

When faced with public anger over AFSPA, the government always points to the Army as being adamantly opposed to doing away with it. The Army says it needs AFSPA to put down “separatists and terrorists” in these states. That is, the rape and humiliation of women, the killing of youth in fake encounters, the plunder of the people of these states, are all a necessary component of the “war against terrorism and separatism” and in the service of “defending national unity and territorial integrity”. This is an open admission that the Central government is unwilling to deal with the political problems in these states, the concerns of the people, by any other means than fascist military rule.

In Manipur and other states of the North East, as well as in Kashmir, the people are alienated from the Indian Union precisely because the Central state has applied a colonial imperialist policy of forcible suppression of the people. There is ample evidence to show that the state has actively sponsored terrorist groups in these states, to spread anarchy and violence, divide people on sectarian lines, and justify continued army rule. How else can it be explained that the more the Indian state and its political parties justify their crimes against people in the name of “defence of national unity and territorial integrity”, the more this national unity is under threat. The systematic persecution of people of North East and Kashmir, even when they go to work or study in other parts of the country, shows the policy of deliberate discrimination against these people pursued by the Indian state.

The demand raised by Irom Sharmila, by masses of people all over the North East and Kashmir, and by countless people of conscience all over India, for the immediate and unconditional repeal of AFSPA, is an absolutely just demand. All such laws that place the right to life and basic liberties at the mercy of the armed forces of the state are abominable and have no place in our society. The CGPI demands that AFSPA and similar draconian laws be repealed forthwith. All cases of abuse of people committed under these laws by those in authority must be investigated speedily and the perpetrators of the crimes be given exemplary punishment. The courageous activist Irom Sharmila must be released forthwith!