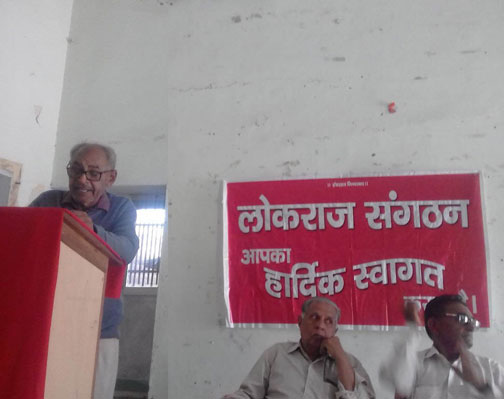 Shri. Dunichand elaborated on the objectives and work of Lok Raj Sangathan. With numerous examples, he clarified that the current political system and process ensures that the people of the country are excluded from active participation in the political process. People do not have the right to demand accountability from or recall their elected representatives, nor do they have to the right to take major decisions which impact them. He said that 150 big monopoly capitalists control the economic, political and social system in India. Whether the BJP or the Congress forms the government, both parties only implement the capitalist agenda. Lok Raj Sangathan is organizing people to come together and fight for their rights in their places of work and residence. He appealed to the people to work for creation of a new system where the people would be truly free, will govern themselves and will be capable of taking decisions that impact them.

Other speakers exposed the present political and economic system and gave many examples to show that the rights of the toiling people are abused within it in an organised manner. Unemployment and the problems being faced by workers were discussed. The attempts by rulers to divide people on the basis of religion, caste, etc. were heavily condemned. It was clearly explained that elections are not reflective of the true mandate of the people. The speakers appreciated the work being done by Lok Raj Sangathan.

Closing the seminar, Shri Hanuman Prasad Sharma appealed to all that they should spread awareness amongst the people and mobilise the people to move forward in the struggle for their rights.