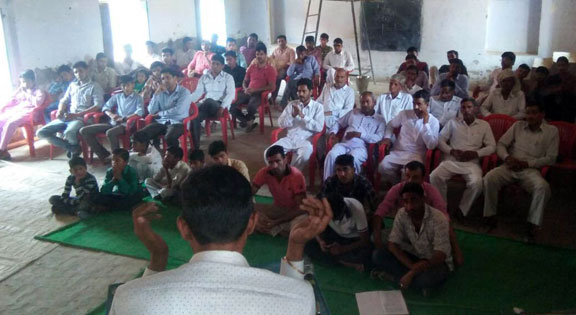 On 23 march on the occasion of martyrs day as Conference was organised in Ramgarh in Rajasthan on the theme “The relevance of Bhagat Singhs Views in India Today”. Vice-sarpanch of Ramgarh Shri Chetram, and Principal Karni Singh, chaired the event.

The speakers highlight various problems faced by different sections of people. Many speakers pointed out that our children are not told and taught about our martyrs in the curriculum because out education system is deeply influenced by the colonial education. All the speakers in one voice condemned the divide and rule policy instituted by the colonial rules are continued by our present day rules, on the basis of which people of various regions and religions are made to fight against each other, and are killed in communal massacres. Citing the example of the conditions of our farmers and people living in villages, the speakers said that while thousands of corers worth loan given out to big capitalists and is waived, the farmers are made to commit suicide under the weight of small debts, and are forced to migrate to urban centres, just be become victims of the capitalists exploiters.

Citing the lack of doctors, compounders, bed, etc in the hospitals, and their abysmal conditions, they condemned the growing thrust being given to privatisation of health services, and how they are playing with the health of people. They also condemned the privatisation of education. Imperialist ambition of big bourgeoisie of India was also discussed in detail. All the speakers stressed that the dream of India for which Bhagat Singh and his comrades gave their life, remains unfulfilled, and we must commit ourselves to fulfil that dream of our martyrs.

In a very engaging manner vice-president of Lok Raj Sangathan Comrade Hanuman Prasad Sharma, narrated the life and work of Shaheed Bhagat Singh. He said that reading of the manifesto and declaration of Hindustan Republican Association and later Hindustan Socialist Republican Association, clearly shows that our martyrs totally against any compromise with the British colonisers, and wanted to build an India that was free from any kind of exploitation, whether by the white British, or black Indians. He said that that task of our martyrs remains unfinished, and appealed all to come forwards to wage struggle to take the task to completion.