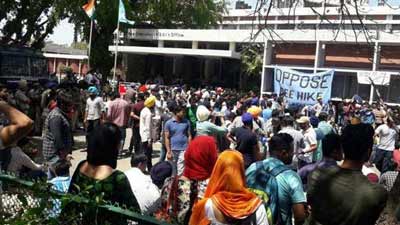 On April 11, the JSAC called for a university bandh, during which hundreds of students staged a gherao at the office of the VC, demanding roll back of the fee hike. They were brutally attacked by the police, with tear gas, water cannon and lathis. Another university bandh was organized on April 21 during which too, they were viciously attacked by the police and 52 students were arrested.

Defying the police brutality and the callousness of the authorities, the students have been continuing with their struggle. The Punjab University Campus Students’ Council (PUCSC) president and joint secretary have started an indefinite hunger strike. Office bearers of the PUCSC have met the Governor and submitted a memorandum, asking for a fee hike rollback. The students have denounced the University Grants Commission (UGC) and Ministry of Human Resources Development (MHRD) order to the universities to raise their own resources internally. They have criticized the announced fee hike as yet another move by the government towards privatization of higher education and making higher education inaccessible for the youth of the working class and toiling people. They have denounced the police attack on the protesting students as a blatant attack on the right to dissent.

The struggle of the students of Punjab University has won the support of many other sections of the people. Students, teachers, academics and artists have organized protest actions in various parts of Punjab, in support of their demand. Several mass organisations of Haryana and Punjab have submitted a memorandum to the authorities, demanding punishment of the police personnel involved in attacking the students and immediate roll back of the fee hike.