The last week of April saw wide protests by the people of South Korea in opposition to the installation of the Terminal High Altitude Area Defense (THAAD) missile system a Golf Course in Seongju. 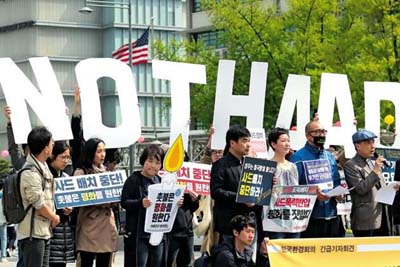 The last week of April saw wide protests by the people of South Korea in opposition to the installation of the Terminal High Altitude Area Defense (THAAD) missile system a Golf Course in Seongju by the US military, aided and abetted by the South Korean Police, in the early morning hours of April 26. They came in like thieves stealthily in the night. As soon as the residents got wind of the fact, starting from midnight and going past the early hours of the morning, hundreds of protestors staged sit-ins to block the road, thereby stopping the entry of the military vehicles carrying the battery and other machinery into the marked site.

The protests of the people of Seongju and Gimcheon is laudable in the face of heavy force used by the police. Many of the protestors including Buddhist priests, and priests of the Catholic order and civilians were brutally forced to move by the 8,000 riot cops, resulting in severe injuries, collapse and unconsciousness. Ambulances had to be deployed to take the wounded and injured for health care.

And what were the people demanding? Their right to non-interference by the US Military on their land without their consent. There was no telling what harm the radio waves of the radar could cause to their health and to their agricultural fields and produce.The environmental impact assessment has yet to be completed, they also noted, yet the key THAAD components have already been transported into the deployment site.As the riot police continued to block the residents from occupying the streets and obstructing the entry of U.S. military vehicles, the residents raised militant slogans like “U.S. cops back off”.More protests were held in the days that followed including a rally against the deployment of the US THAAD system near the US embassy in Seoul. There are widespread protests that clearly show that the people of South Korea are opposed to US military presence in their country and their government’s collaboration with the US.

The article in MEL (April16-30, 2017), ‘US war mongering in the Korean peninsula: Which is the “rogue” state?’ has correctly clarified that the rogue state is the US and none else. Not North Korea nor any other state, which the US continues to target by turn in various parts of the world. US imperialism cannot brook any opposition to its imperialist aims.

To quote the article: “It is US imperialism that has not only built a stockpile of nuclear weapons that can devastate the whole world many times over, it is constantly threatening North Korea with nuclear annihilation if it does not capitulate before the US”.

The US warmongering moves and provocations have to be opposed, and the principle of sovereignty of nations has to be defended by all democratic and peace loving people.