March 18 this year marks the 139th anniversary of the Paris Commune, one of the greatest and most inspiring events in the history of the working class. Through a heroic revolutionary uprising, the working people of Paris took over the reins of political power and established their own state power, in the form of the Paris Commune, from March 26 until May 30, 1871, when it was brutally crushed.

March 18 this year marks the 139th anniversary of the Paris Commune, one of the greatest and most inspiring events in the history of the working class. Through a heroic revolutionary uprising, the working people of Paris took over the reins of political power and established their own state power, in the form of the Paris Commune, from March 26 until May 30, 1871, when it was brutally crushed.

They replaced the capitalist state with their own organs of government and held political power for nearly two months. The workers of Paris strove, in extremely difficult circumstances, to put an end to exploitation and oppression and to reorganize society on entirely new foundations. The lessons of the Paris Commune remain of fundamental importance for the working class and communists all over the world, in the struggle to overthrow capitalism and march towards socialism and communism.

At that time Paris was under siege of the German Army, following the capitulation of the French Army. With mass demonstrations throughout Paris, opposing the capitulation and calling for the overthrow of the Emperor, the French bourgeoisie formed a “government of national defence” and called on the proletariat to fight for national independence under its leadership. However, for the class interests of the French bourgeoisie, the armed workers within Paris were a far greater threat than the foreign army at its gates. Having concluded an ignominious peace with the Prussians, the Versailles government proceeded to attack and disarm the Paris proletariat. The workers replied with civil war and by proclaiming the Commune. 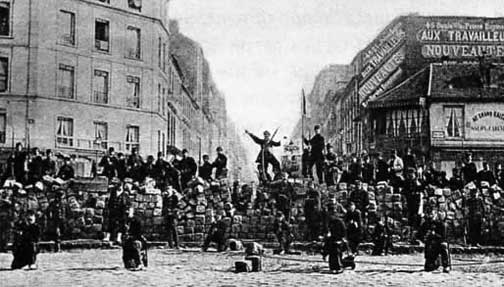 Marx and Engels closely followed the developments of the Paris Commune and drew many important lessons from it, which have been documented in their famous work ‘The Civil War in France’. Although Marx did not expect the working people of Paris to succeed in their revolutionary efforts and had warned them, just a few months before, that it would be the “folly of despair”, when in 1871 the uprising did take place, Marx greeted it with great enthusiasm and regarded it as a very important historical experience and a certain advance of the world proletarian revolution.

The experience of the Paris Commune led Marx and Engels to ‘correct’ one aspect of the Communist Manifesto, in their preface to the 1872 edition. They considered it as one of the most profound lessons of the Paris Commune. In their words, “One thing especially was proved by the Commune, viz., that ‘the working class cannot simply lay hold of the ready-made state machinery and wield it for its own purposes’. Lenin clarifies in The State and Revolution, that this means “that the working class must break up, smash the ‘ready-made state machinery’, and not confine itself merely to laying hold of it.”

The working men of Paris realized, at the first instance, that the centralized state power, with its organs such as the standing army, police, bureaucracy, clergy and judiciary, had to be done away with. Because of the ongoing war with the Germans who held Paris under seige, the working people of Paris were able to get rid of the army, and replaced it by a National Guard, the bulk of which consisted of working men. As Marx elaborates, “The first decree of the Commune, therefore, was the suppression of the standing army, and the substitution for it of the armed people.”

The Paris Commune sought to establish people’s control over its elected representatives. The Commune was formed of the municipal councillors, chosen by universal suffrage in the various wards of the town, responsible and revocable at short terms. The majority of its members were working men, or acknowledged representatives of the working class. It was to be a working, not a parliamentary body, executive and legislative at the same time.

The police as also officials of all other branches of the administration were turned into the responsible, and at all times revocable, servants of the Commune. From the members of the Commune downwards, the public service had to be done at workmen’s wages. All the functions of the state were taken into the hands of the Commune. Having got rid of the instruments of physical force of the old government, the Commune proceeded to break the instrument of spiritual suppression, the power of the priests.

Education and science were opened up for the working people. All educational institutions were opened to the people and at the same time cleared of all interference of church and state. Thus, not only was education made accessible to all, but science itself was freed from the fetters which the class prejudice of the bourgeoisie had imposed upon it.

The judiciary was divested of the cloak of sham independence behind which they served the government of the bourgeoisie. Magistrates and judges were to be elected, responsible, and revocable.

The Paris Commune showed in practice that the running of the government need not be an expensive affair by destroying the two greatest sources of expenditure: the standing army and state bureaucracy.

The Paris Commune also took various social measures in favour of the working people, such as the abolition of night-work for certain sections of workers; prohibition of and punishment for employers who tried to reduce the workers’ wages by levying all kinds of fines on them, placing all closed factories and workshops under the control of associations of workers without any compensation to the capitalists, etc.

The Paris Commune was a splendid example of the unanimity with which the proletariat was able to accomplish the democratic tasks which the bourgeoisie could only proclaim. Without any particularly complex legislation, in a simple, straightforward manner, the proletariat, which had seized power, carried out the democratisation of the social system. Marx clarifies its revolutionary essence: “Its true secret was this. It was essentially a working class government, the product of the struggle of the producing against the appropriating class, the political form at last discovered under which to work out the economic emancipation of labor.” Marx also explained how the Paris Commune showed the way for the abolition of class rule. “The political rule of the producer cannot co-exist with the perpetuation of his social slavery. The Commune was therefore to serve as a lever for uprooting the economical foundation upon which rests the existence of classes, and therefore of class rule. With labor emancipated, every man becomes a working man, and productive labor ceases to be a class attribute”.

The Russian proletariat under the leadership of Lenin and the Bolshevik Party, drew inspiration and valuable lessons from the experience of the Paris Commune, in their heroic struggle to successfully establish the dictatorship of the proletariat and build socialism.

The Paris Commune was meant to serve as a model of the new form of political organization for the workers in all the industrial centres of France. However, the lack of any historical precedent, the absence of clear, organised leadership, of a clear program, combined with the social and economic dislocation of a besieged city, posed many difficulties before the workers.

In drawing lessons from the experience of the Paris Commune, Marx and Engels, and later Lenin have pointed to two main mistakes of the Communards. One of these was their failure in “expropriating the expropriators”, in particular, their failure to take control of the Bank of France, which continued to finance the reactionaries against the workers of Paris. The second mistake was their lack of decisive action to destroy their enemies. The victorious proletariat of Paris underestimated the military strength of the Versailles government and gave it time to gather its forces and prepare to crush the Commune with brute military force.

Finally, the Versailles army entered Paris on 21st May 1871. The communards fought with tremendous courage, but in the absence of any clear military strategy, they were left without leadership and were finally defeated on May 28. The reactionary forces carried out a bloody slaughter of many tens of thousands of men, women and children – anyone suspected of having cooperated in any way with the Commune – lasting several weeks.

Hailing the heroic Paris Commune, Marx wrote “Working men’s Paris, with its Commune, will be forever celebrated as the glorious harbinger of a new society. Its martyrs are enshrined in the great heart of the working class” Thus, despite all the attempts of the bourgeoisie and its spokesmen to dismiss and vilify the Paris Commune, its lessons continue to inspire the working class of all countries in the struggle to build a society free from all exploitation of humans by humans.