This year marks the centenary of the conclusion of the First World War. The Armistice on 11th November, 1918 at 11.11 am, ended four years of carnage that had begun in 1914. Across the world, anti-war rallies and peace demonstrations are being held to recall the horrors of that war and discuss ways to end all future wars. The bloodbath of 1914-18 was a savage slaughter perpetrated by a gang of predatory imperial powers, locked in a deadly struggle to capture and carve up territories, markets and resources.

This year marks the centenary of the conclusion of the First World War. The Armistice on 11th November, 1918 at 11.11 am, ended four years of carnage that had begun in 1914. Across the world, anti-war rallies and peace demonstrations are being held to recall the horrors of that war and discuss ways to end all future wars.

The bloodbath of 1914-18 was a savage slaughter perpetrated by a gang of predatory imperial powers, locked in a deadly struggle to capture and carve up territories, markets and resources.

By the beginning of the 20th century, capitalism had grown into a world system of colonial oppression and financial strangulation of the overwhelming majority of the population of the world by the rulers of a handful of “advanced” countries. The contradiction among the different imperialist powers and their groupings for the redivision of the world had become acute.

Germany, the rising industrial power seeking its place in the sun from the British and French empires, entered the war hoping to capture new colonies. Other imperialist powers such as Austria-Hungary and Russia wanted to pick the spoils from the crumbling Ottoman empire. All the imperialist powers of Europe were responsible for the resulting murderous barbarism.  With typical imperialist arrogance, the British empire justified the carnage by claiming that it was defending democracy, international law and the rights of small nations. 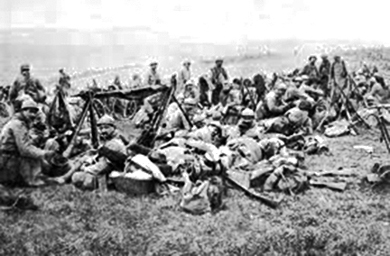 ​All the warring states were involved in the violent suppression of the rights of nations and peoples within their colonies. In the decades before 1914, about 30 million people died from famine in British India when the colonial administration enforced the export of food to “encourage the free market economy”. Britain’s ally Belgium, presided over the death of 10 million Congolese from forced labour and mass murder in the previous couple of decades. German imperialists had carried out systematic genocide in what is now Namibia in the same period. It was in pursuit of this “liberal global order” that these imperialist powers scarified half their youth.

At the end of the war, Britain and France divided up the defeated German and Ottoman empires between them, from Palestine to Cameroon, trampling on the rights of nations, and laying the ground for future disasters in the process.

M.K. Gandhi, who was called to India from South Africa in January 1915, supported the British in the war. Many of the richest Indian capitalists supported the war, expecting to reap huge profits from supplying goods and services for the British war efforts. On the other hand, 13 lakh (13,00,000) Indian soldiers were sent by the colonial administration to fight on the side of the British as cannon fodder (See Box).

The Indian economy was wrecked by exorbitant levels of taxation and inflation. Disruption of trade caused by the conflict led to widespread unemployment. Immediately after the war, a raging infuenza pandemic in 1918-19 resulted in a death toll of between 1 and 2 crore people. Poverty, disease and all-round suffering was widespread in India during these years.

Sir Edwin Montagu, the Secretary of State for India, announced “increasing association of Indians in every branch of the administration and the gradual development of self-governing institutions with a view to the progressive realisation of responsible government in India as an integral part of the British Empire” in return for the support in the war from the Indian bourgeoisie. The Indian bourgeoisie was satisfied with a Dominion status for India within the British empire. But when the war ended, the British imposed the repressive Rowlatt Act, which vested the Viceroy’s government with extraordinary powers to quell “sedition” against the Empire by silencing and censoring the press, detaining political activists without trial, and arresting without a warrant any individuals suspected of treason against the Empire. Public protests against this draconian legislation were ruthlessly smashed.

Hindustani Ghadar Party gave a call to its members and to all Indian patriots to take advantage of the opportunity offered by the inter-imperialist war.  It put forward the demand for complete independence, that is, complete control of the the treasury, foreign affairs, and military forces by the Indian people.  An Open Letter to the Peoples of India clarified that “our slogans must be such as: Complete independence or non-cooperation! Freedom or nothing else! No freedom, no soldiers from India! No freedom, no money from India! Freedom or resistance!”

During the war, Lenin and the Bolshevik Party in Russia took a principled Marxist stand against the war, in sharp contrast to the shameless opportunism of the leaders of several other socialist parties of the Second International. The latter supported the line of the capitalists of their own countries that this was a war “in defence of the fatherland.”

The Bolshevik Party headed by Lenin boldly rallied the working class and masses of Russian people around the slogan of “Land, Bread and Peace!” They successfully carried out the proletarian revolution and  pulled Russia out of the war. They showed through their action that the only reliable path to peace is the path of proletarian revolution.

Today too there is furious contention among rival imperialist powers and monopoly capitalist groups to grab a greater share of the resources, markets, spheres of influence and territories of the world. The US imperialists have started a debilitating trade war which has the potential to take the world to the brink of another world war.

In these conditions it is extremely important that the working class and people of all countries draw correct conclusions from the war that ended a hundred years ago. It is the capitalist-imperialist system that is the source of war and aggression world-wide. Imperialist wars are a necessary and inevitable feature of capitalism at its present stage. The only way to put an end to predatory wars is for the working class in each country to become organized and rally all the people for the overthrow of the capitalist system through revolution.